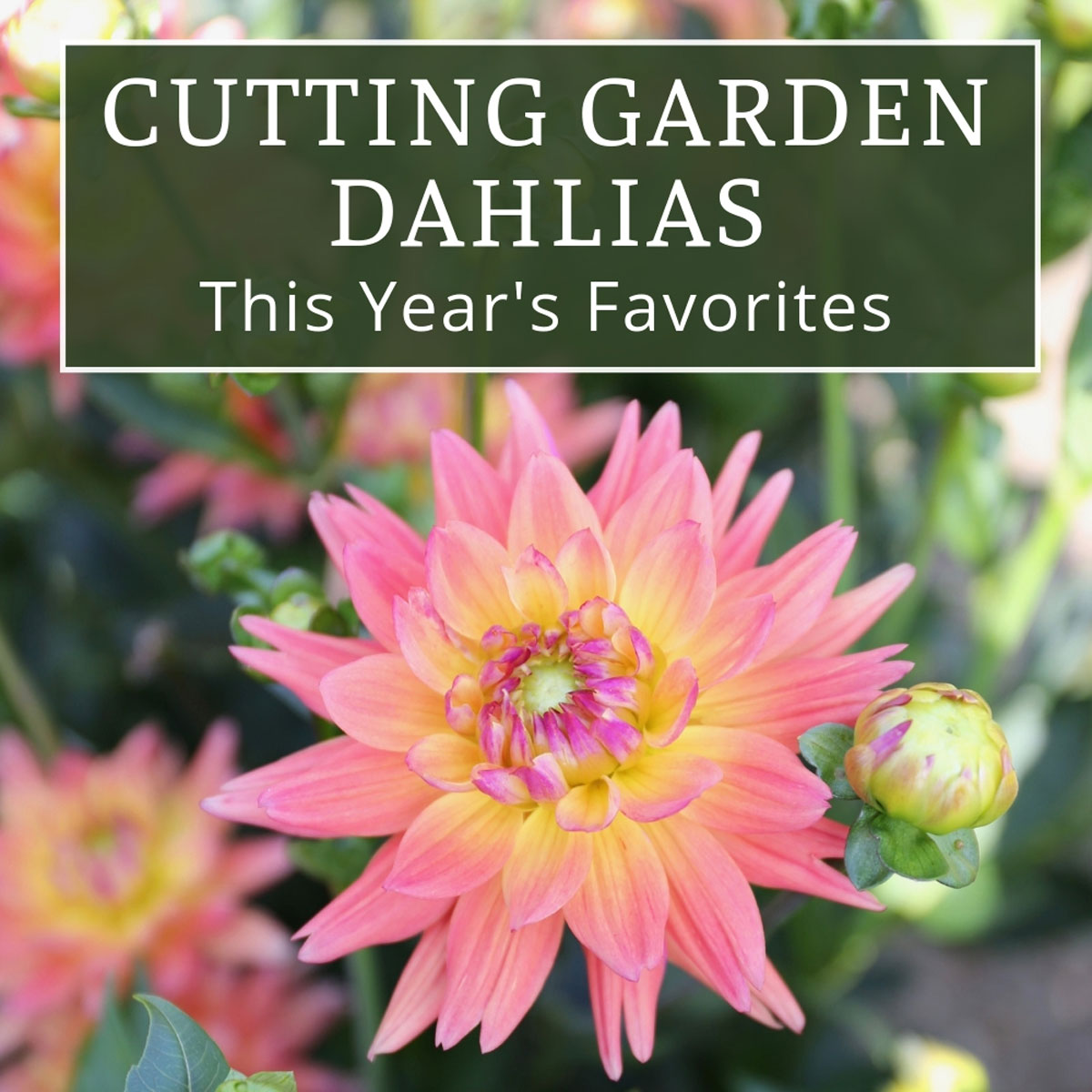 Labor Day is approaching fast and there’s no denying summer is on the way out. The days are shorter, the evenings cooler, and the annuals in my cutting garden have shifted into high gear. They must know their time is limited. I’m hoping to be picking flowers into early October, but am feeling that bittersweet ache that another season is ending.

Before things start looking too disheveled, here’s a look at some of the varieties that have been impressing me. For perspective, this year’s cutting garden includes 35 varieties of dahlias, so it takes some effort to get noticed. 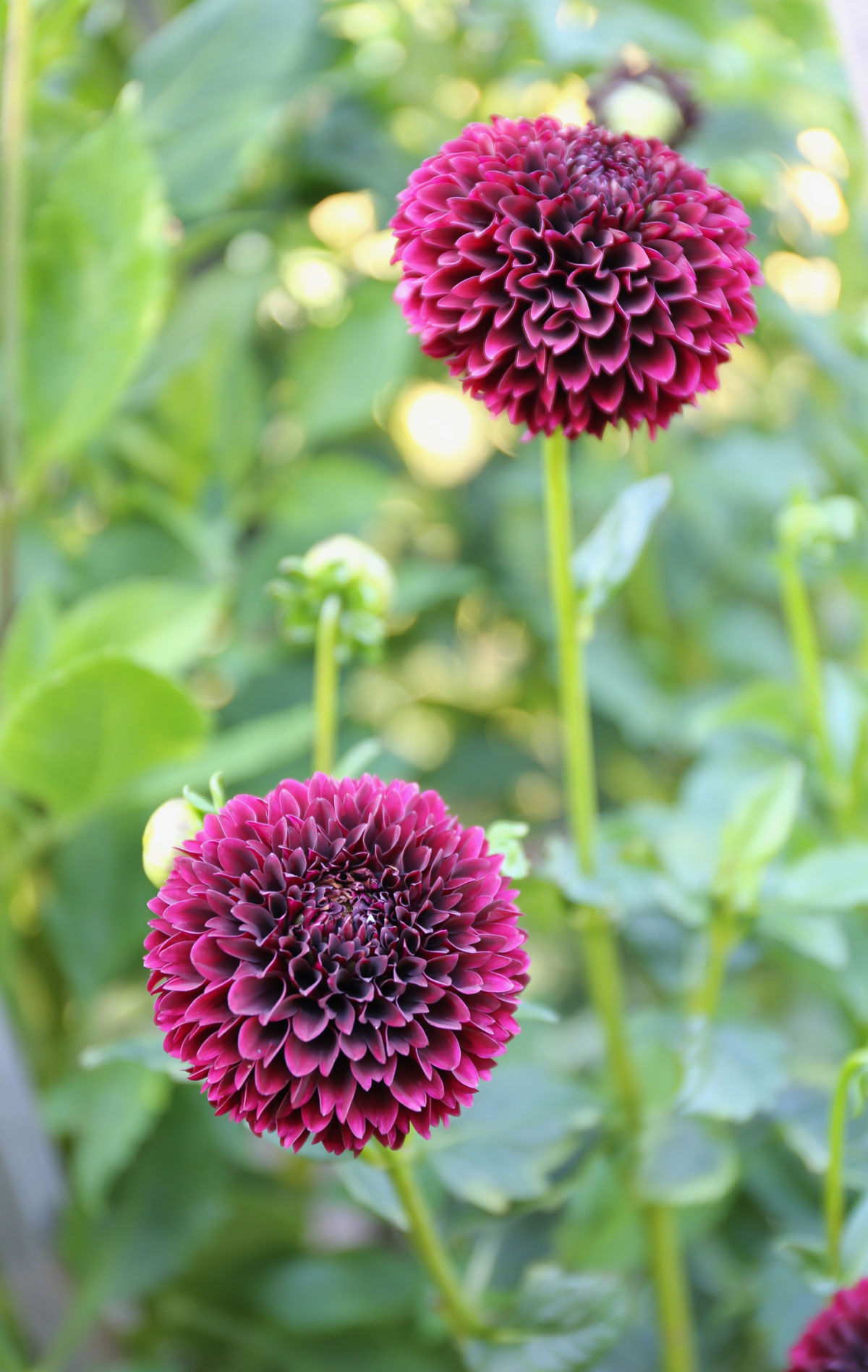 This is my second year growing dahlia Jowey Mirella. If you have not tried it, do! The flowers are like an origami masterwork. When they first open, the centers are smooth and undeveloped. Gradually, the forked, tightly rolled petals pull away and by the time the blossom is fully mature, it’s a perfect wine-red orb. At about 3″ across, Jowey Mirella’s flowers are an ideal size for arrangements. The plants produce tons of flowers and best of all? They seem to last forever — a week on the plant and just as long in a vase. 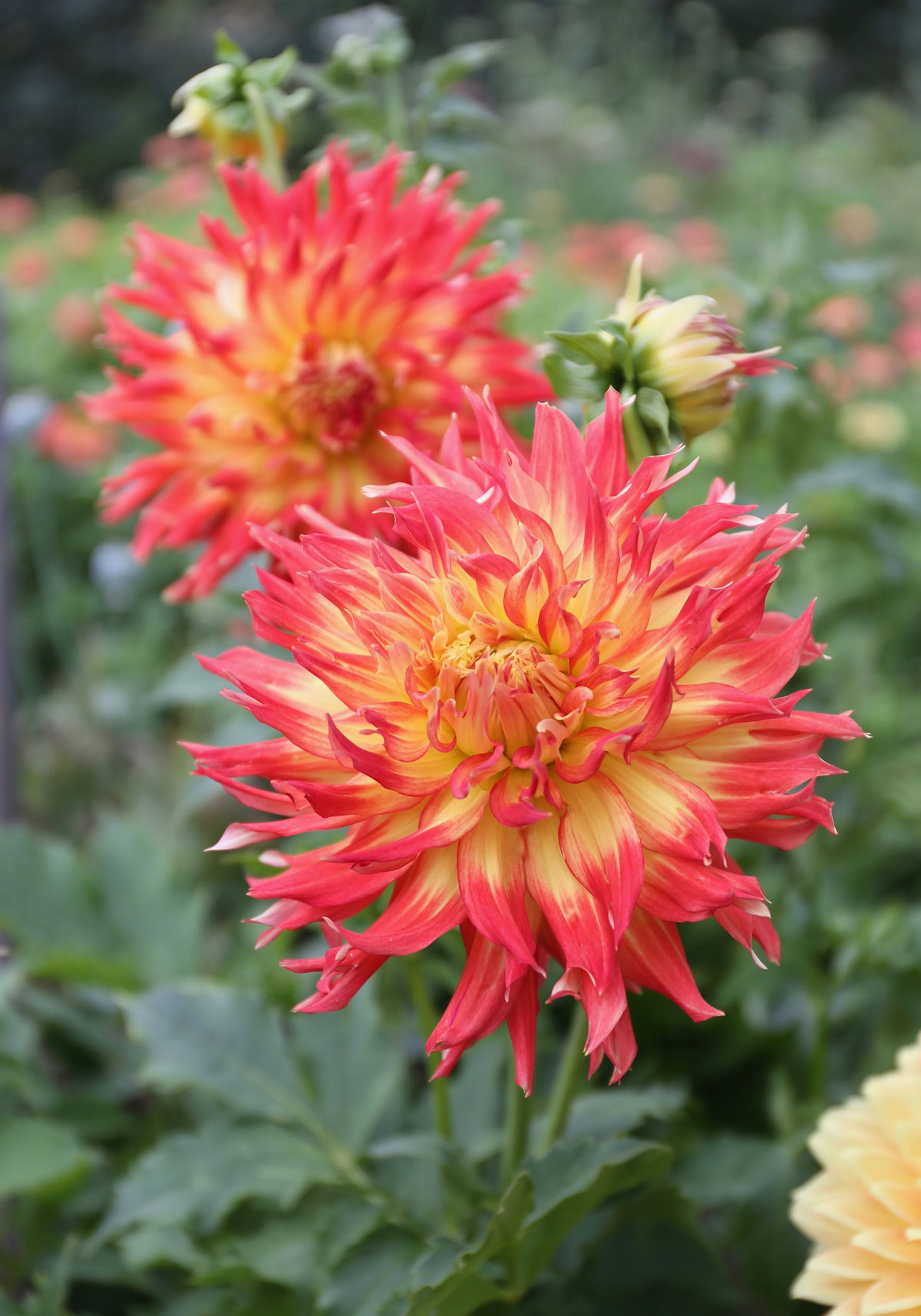 If you like your dahlias big and showy, this one fits the bill. I thought the name was odd, but it’s actually perfect. The combination of color (soft yellow and deep coral) and petal style (forked and twisted) give the flowers radiance and a feeling of movement. Dahlias vary in color depending on location, weather and time of year, so it’s always a little hard to predict what you’ll get. I expected Felida Solar Flare to be an orange flower, but am happy to be growing a dahlia that perfectly matches this year’s Pantone Color of the Year: Living Coral. 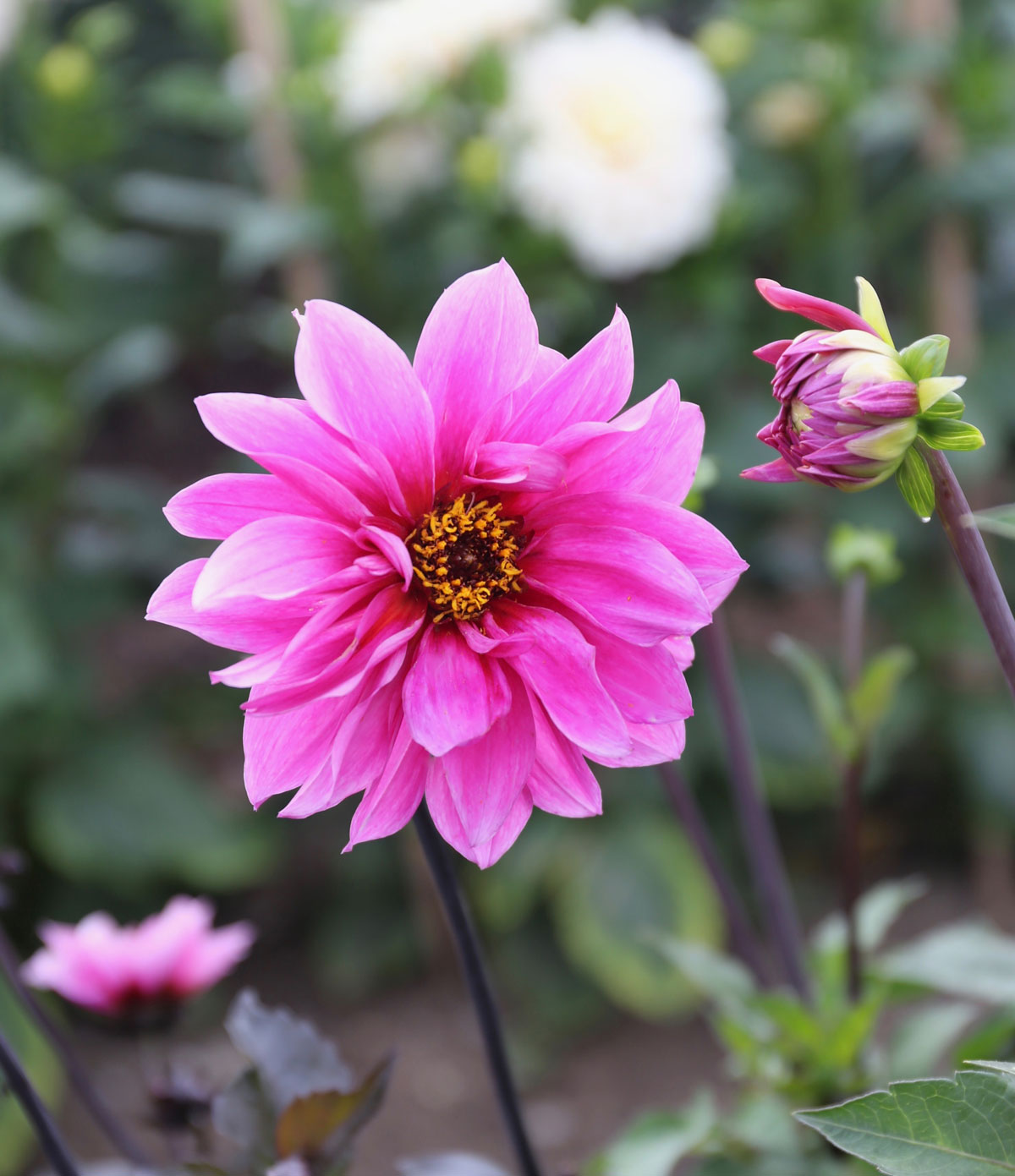 The first time I saw this dahlia was last summer at Camp Rosemary, Posy Krehbiel’s exquisite garden in Lake Forest, IL. Head gardener, Marya Padour had woven it into a number of the perennial borders, making the most of Fascination’s maroon foliage and brilliant fuchsia flowers. I can’t seem to grow dahlias in my perennial borders, but this plant has be performing beautifully in the cutting garden. Fascination’s foliage is just as dark as I remember it and the semi-double flowers are neon pink. The plants are producing a ton of flowers and they are covered with bees from dawn to dusk. 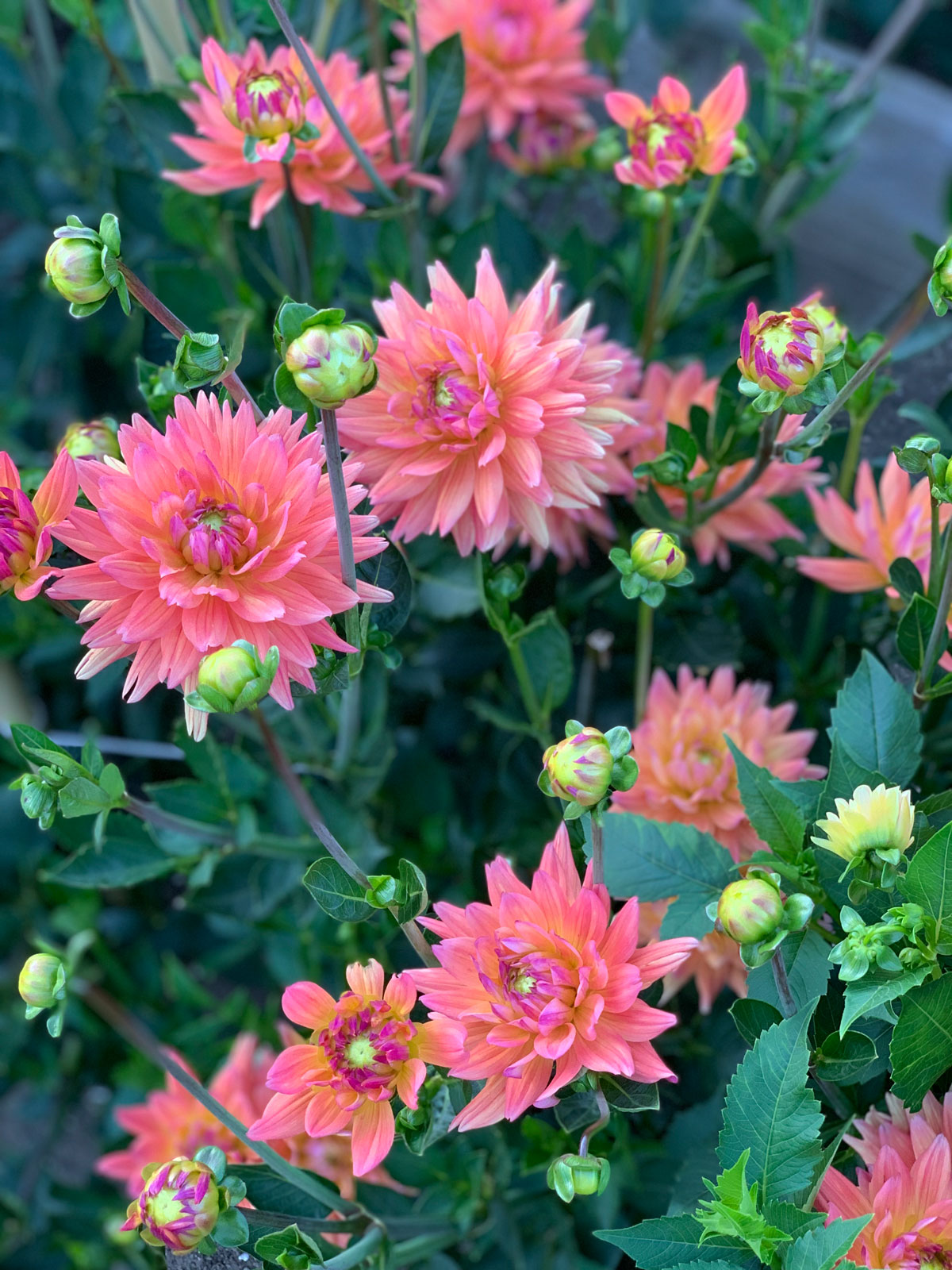 Based on the photos I’d seen, I wasn’t super excited about this dahlia. I love orange flowers, but am honestly not that crazy about cactus-style dahlias. Karma Corona has taken me by surprise and is turning out to be a real star. Here are four things I love about it. The color is more peach than orange (at least at this point in the season). The plant is bushy and just a little over 3 feet tall – no need for staking. The flowers are about 5″ across, which I find to be a great size for cutting. And finally, the plants are blooming their heads off. As you can see in the photo, they are completely covered with flowers and lots more buds. 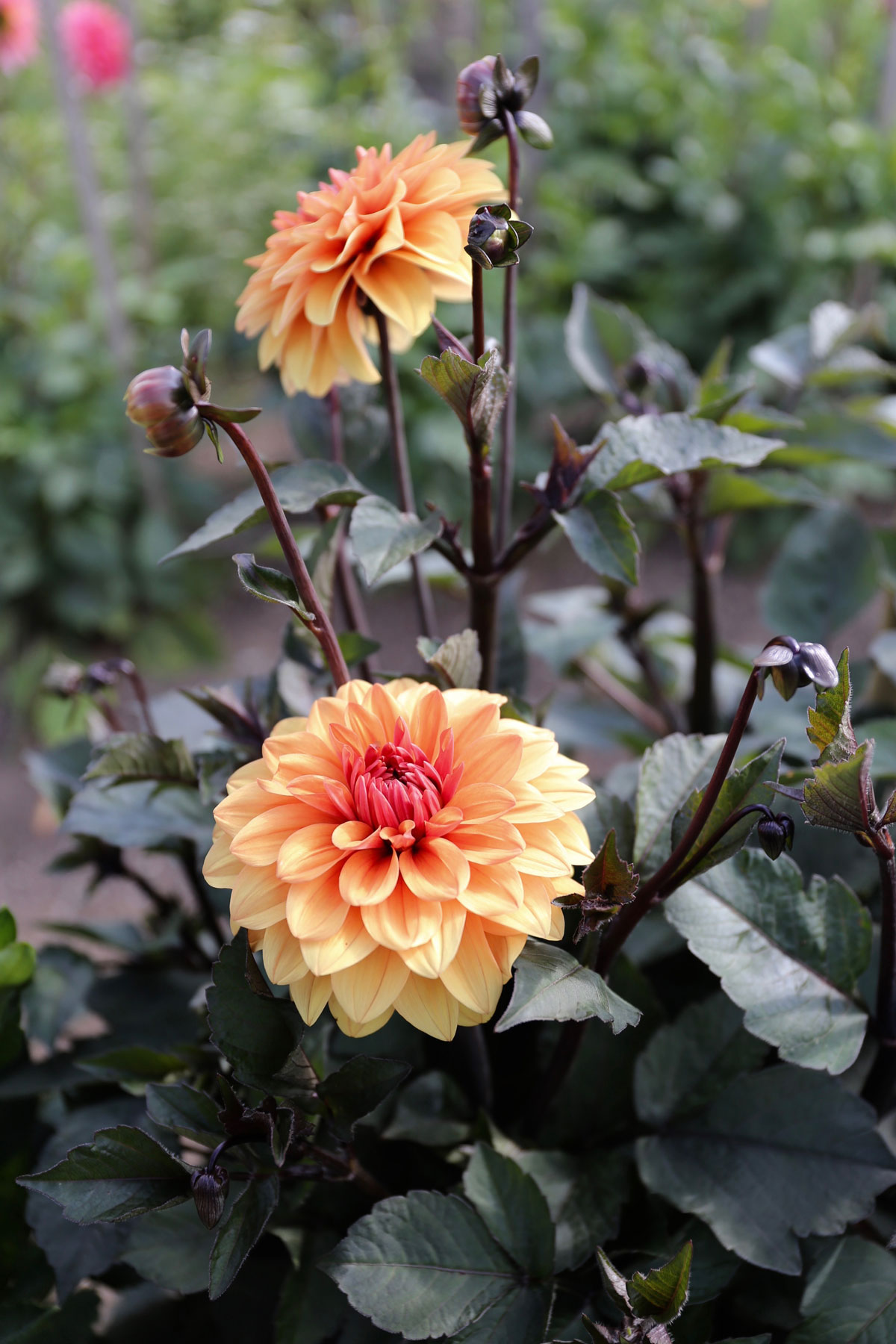 David Howard is a tried-and-true variety that’s been around since the 1960’s. It was bred in England and holds an Award of Garden Merit from the Royal Horticultural Society. Since this dahlia has orange flowers and dark foliage, I was pretty sure I’d like it. And I do! The flowers are 4 to 5″ across and very consistent in color, which I would describe as cantaloupe or creamsicle. Possibly best of all are the plants themselves. Mine are just under 3 feet tall and very full. The foliage and stems are dark maroon and could honestly be called black. If you enjoy playing with contrasting foliage colors, consider including David Howard as a design feature. Even without flowers, it’s a beautiful plant. 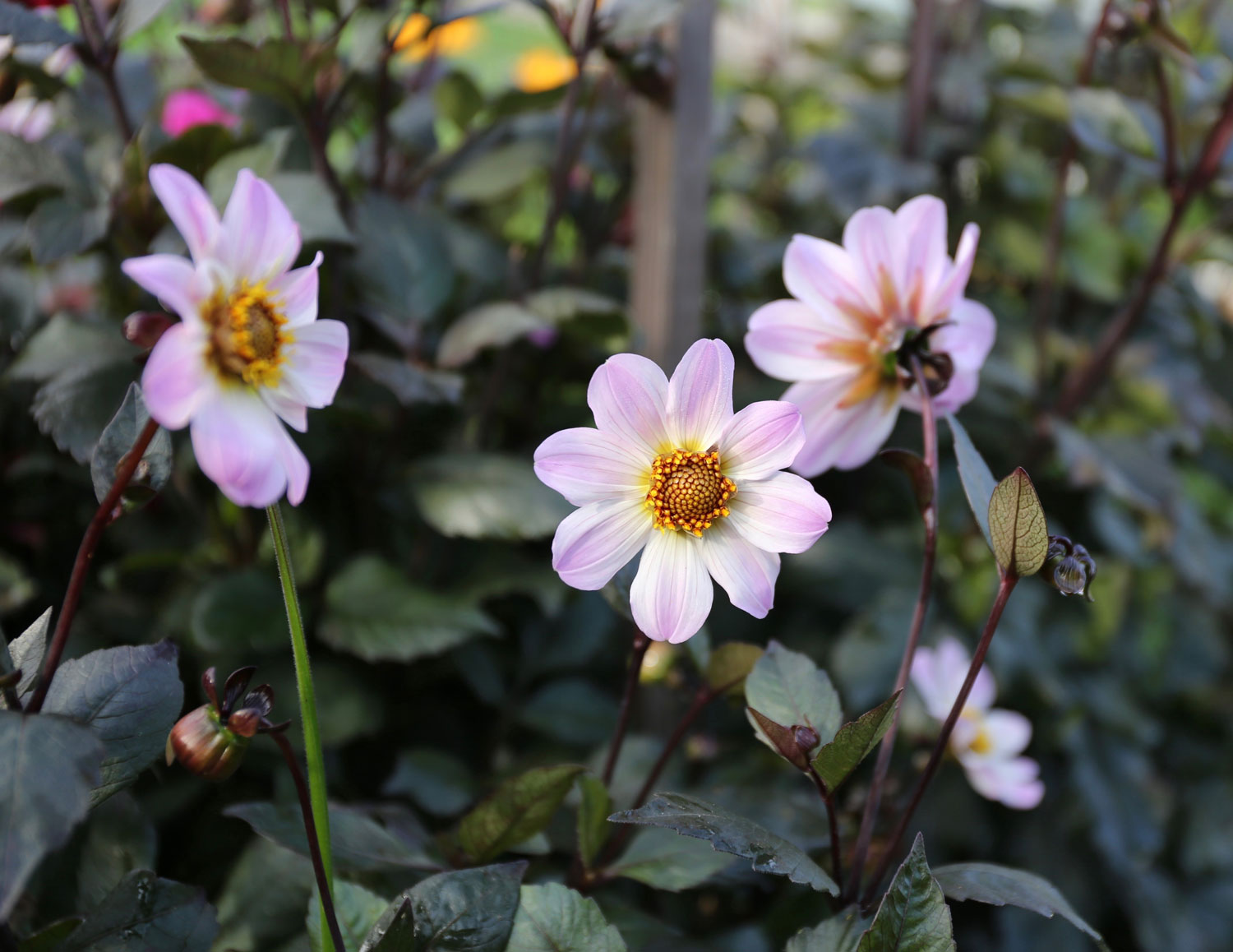 This is not really a cutting garden dahlia. Bishop of Dover‘s stems are long and wiry, but like all single dahlias, the flowers are short-lived. And when you see how much the bees love them, you’ll find it difficult to remove a single blossom. As with other dahlias in the “bishop” series, this one has dark foliage, and it creates a perfect backdrop for the dreamy, lavender-pink flowers. This dahlia would look amazing in a container, and that’s how I intend to grow it next year. 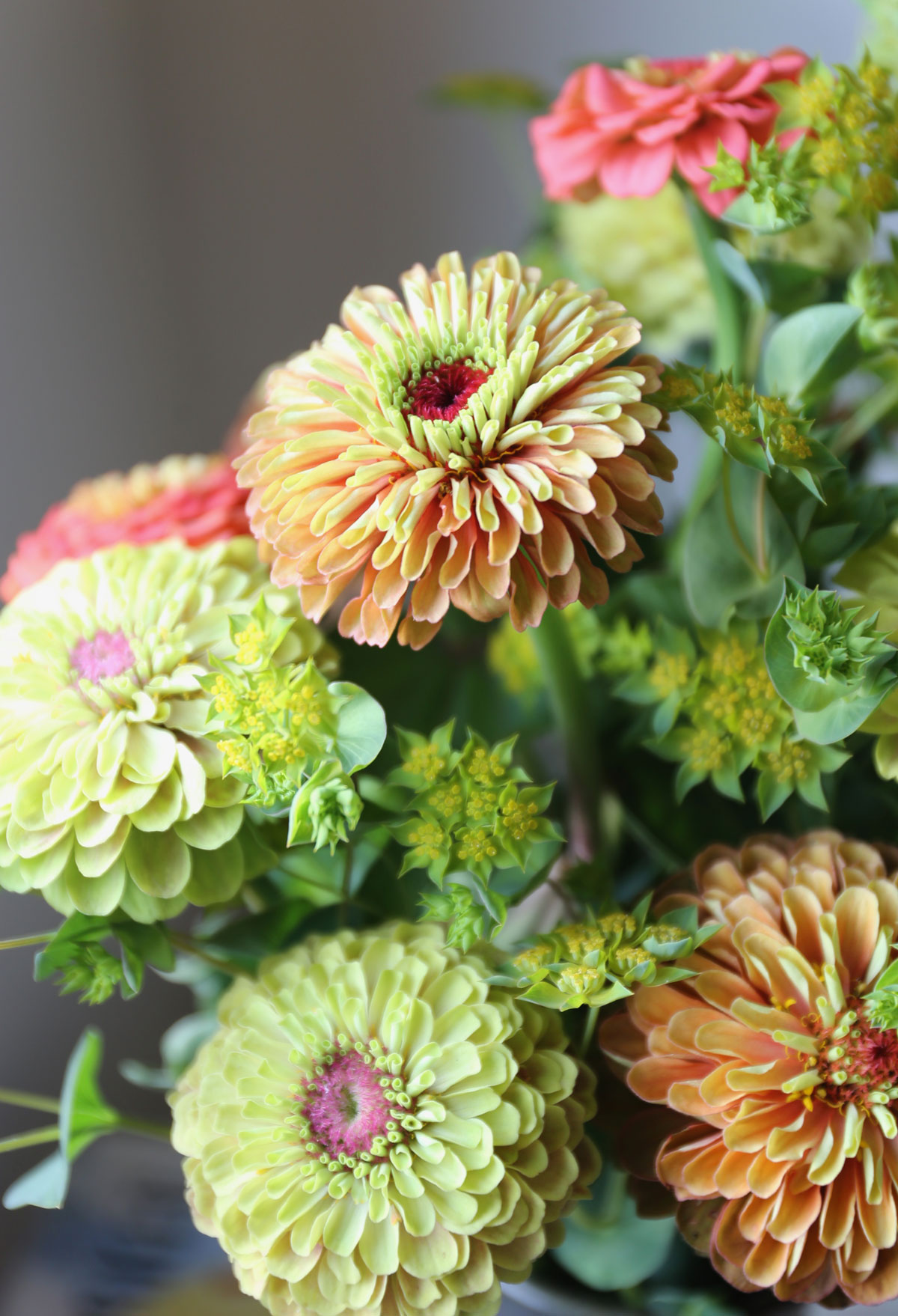 Other Top Plants from This Year’s Cutting Garden

My cutting garden includes more than just dahlias. This has been an incredible season for zinnias and I just can’t pick them fast enough. Queen Lime with Blush and Queen Lime Orange are the sweethearts of this year’s zinnia parade.

I am also loving celosia Sylphid, which has taken its time, but is finally producing fabulous yellow/green flower plumes. Ammi Dara is back for a third year and still a hit. The plants are big enough to need staking, and they crank out a staggering number of lacy flowers that run from white through pink and raspberry. Nigella is also making a return visit, as a stowaway in a seed mix for pollinators. It’s been many years since I’ve grown it and the seed pods are bigger and more gorgeous than I remember. It will be fun to have them around this fall.

What flowers have been impressing you this summer?