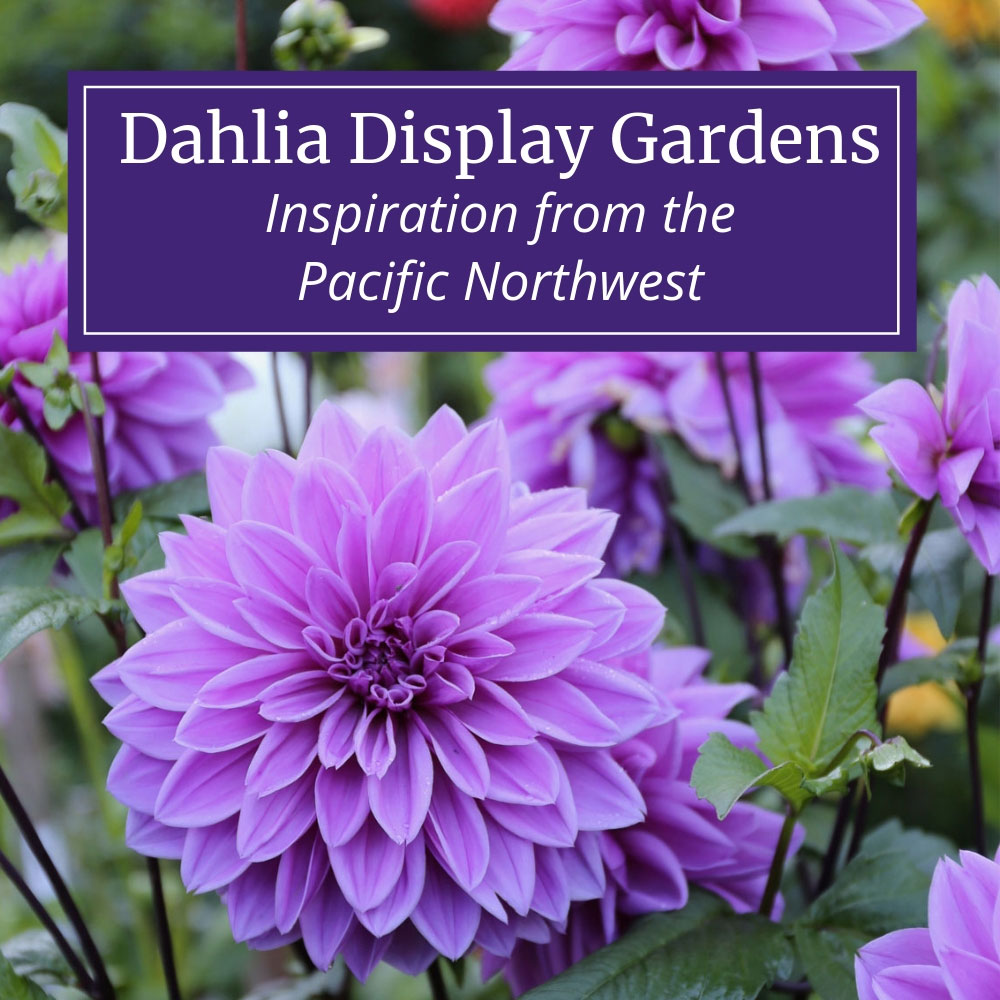 The end of August is a great time to visit the Seattle area. Late summer and early fall are typically dry, with blue skies, daytime temperatures in the mid-70’s and nights in the 60’s. This is also prime time for dahlias.

I know dahlias grow well in the Pacific Northwest. Yet when I was there last week, I was stunned by the vigor of the plants, and the size and number of flowers they were producing. These are happy plants thriving in ideal growing conditions. 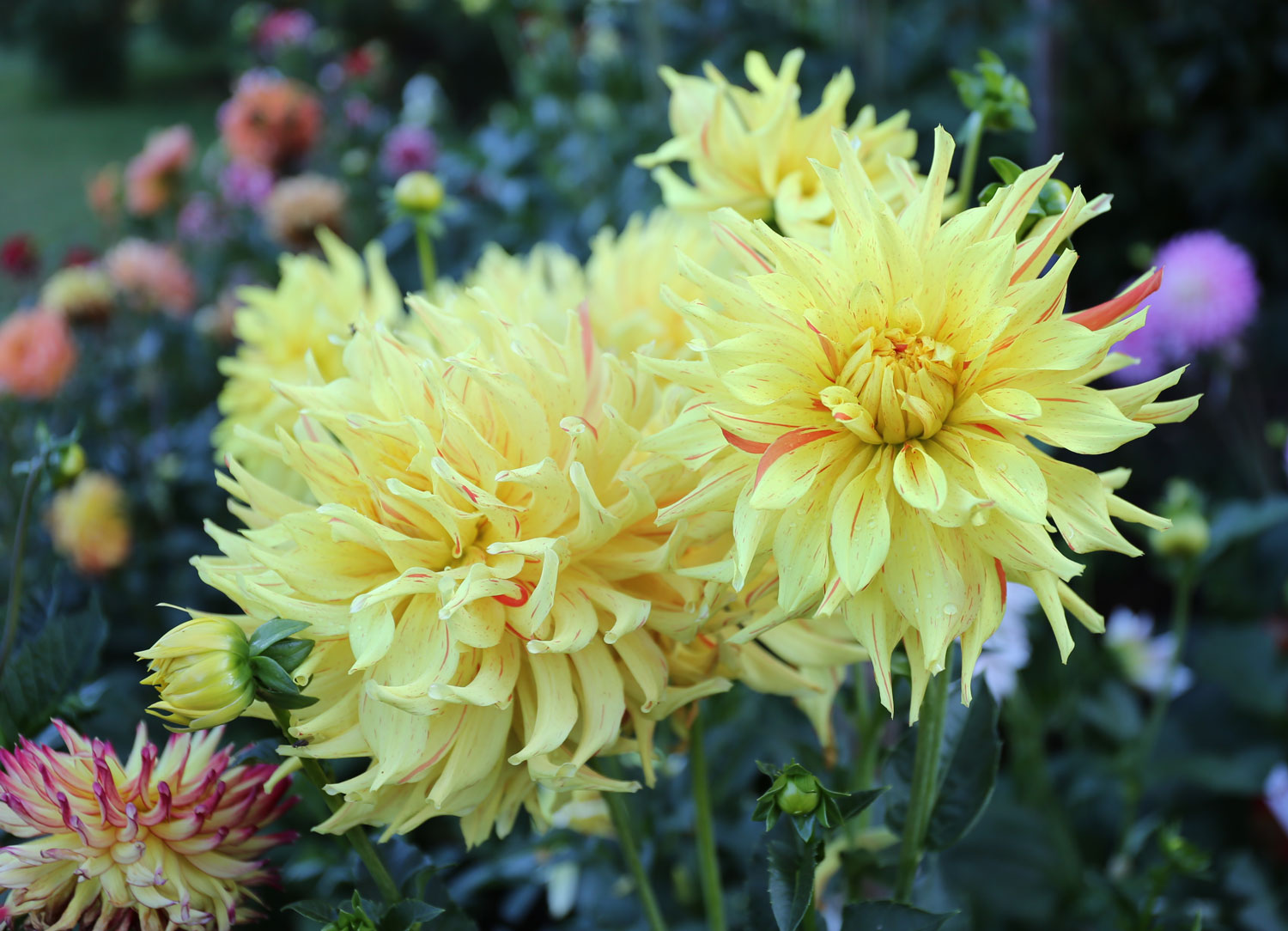 A creamy yellow dinnerplate dahlia, similar to the variety Cambridge.

It also seemed like almost everyone in the greater Seattle area grows dahlias. They were as ubiquitous as petunias. Dahlias were dressing up entryways, peeking out from behind fences and jostling for attention among shrubs. They were thriving in containers and hell strips, cascading over railings and filling up cutting gardens. During my four-day visit, I saw many dahlias and took a lot of photos. The best flowers were at two outstanding dahlia display gardens, which are are well worth a visit if you are in the area. 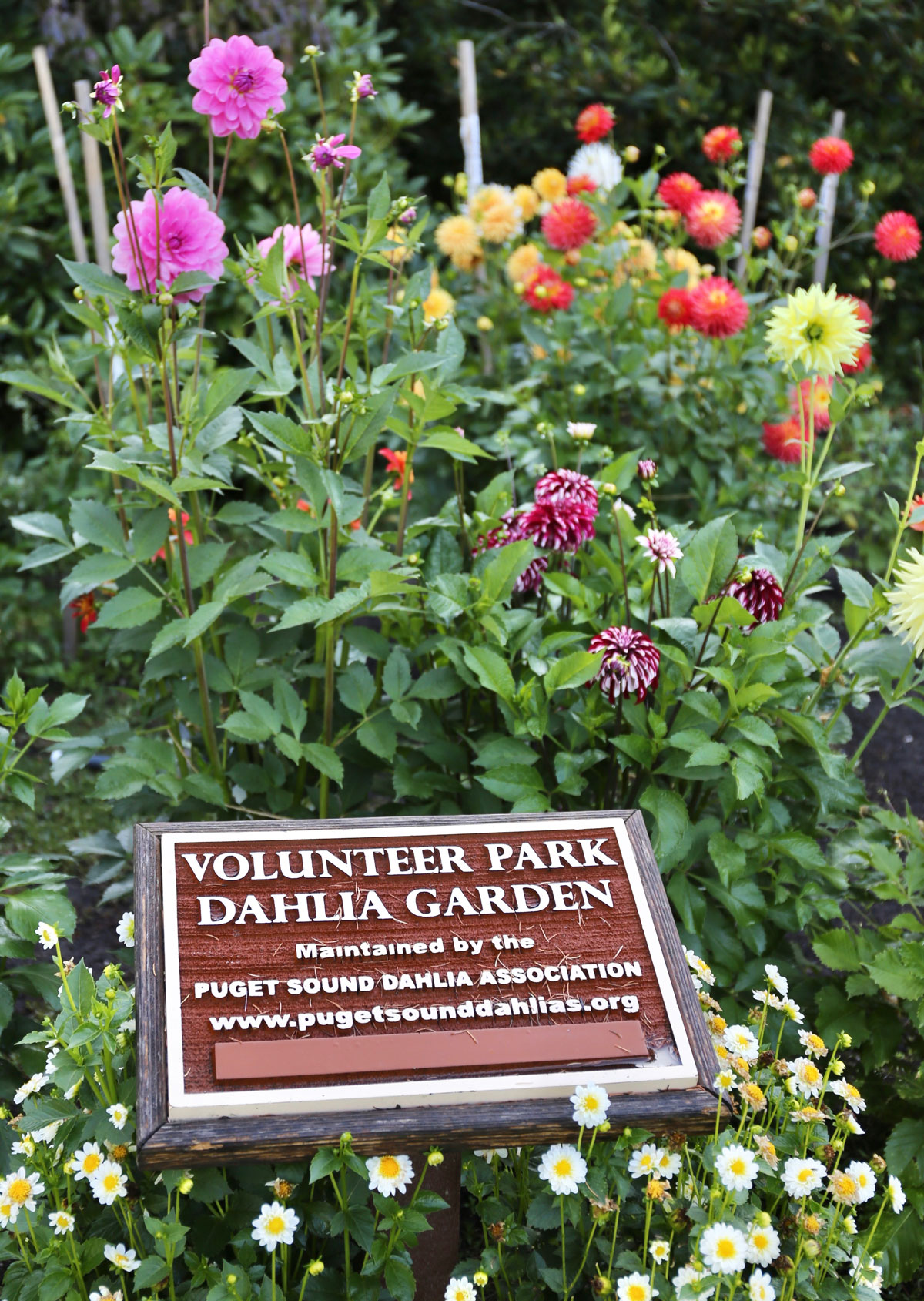 This dahlia display garden is located in Seattle’s Capitol Hill neighborhood, just outside the Volunteer Park Conservatory. The garden is in a sheltered area beside a tall hedge, with 10′ deep, undulating beds containing more than 250 varieties. These dahlias get early morning shade, then full sun until late afternoon. The garden is lovingly tended by a band of dedicated volunteers. They are ever-present: planting, staking, tying, deadheading and answering questions from a steady stream of admirers. 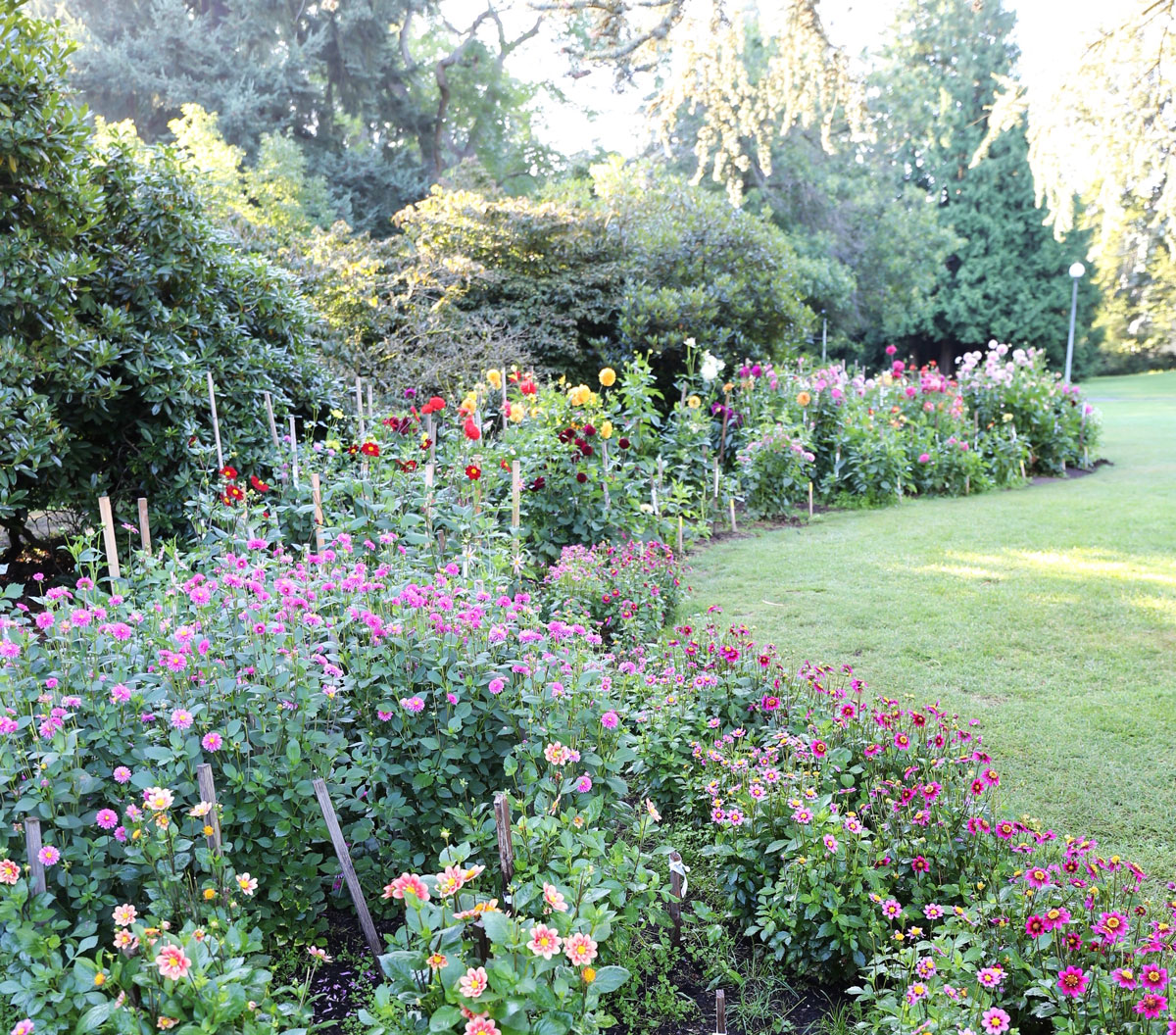 Here you can see about a third of the Volunteer Park Dahlia Garden. 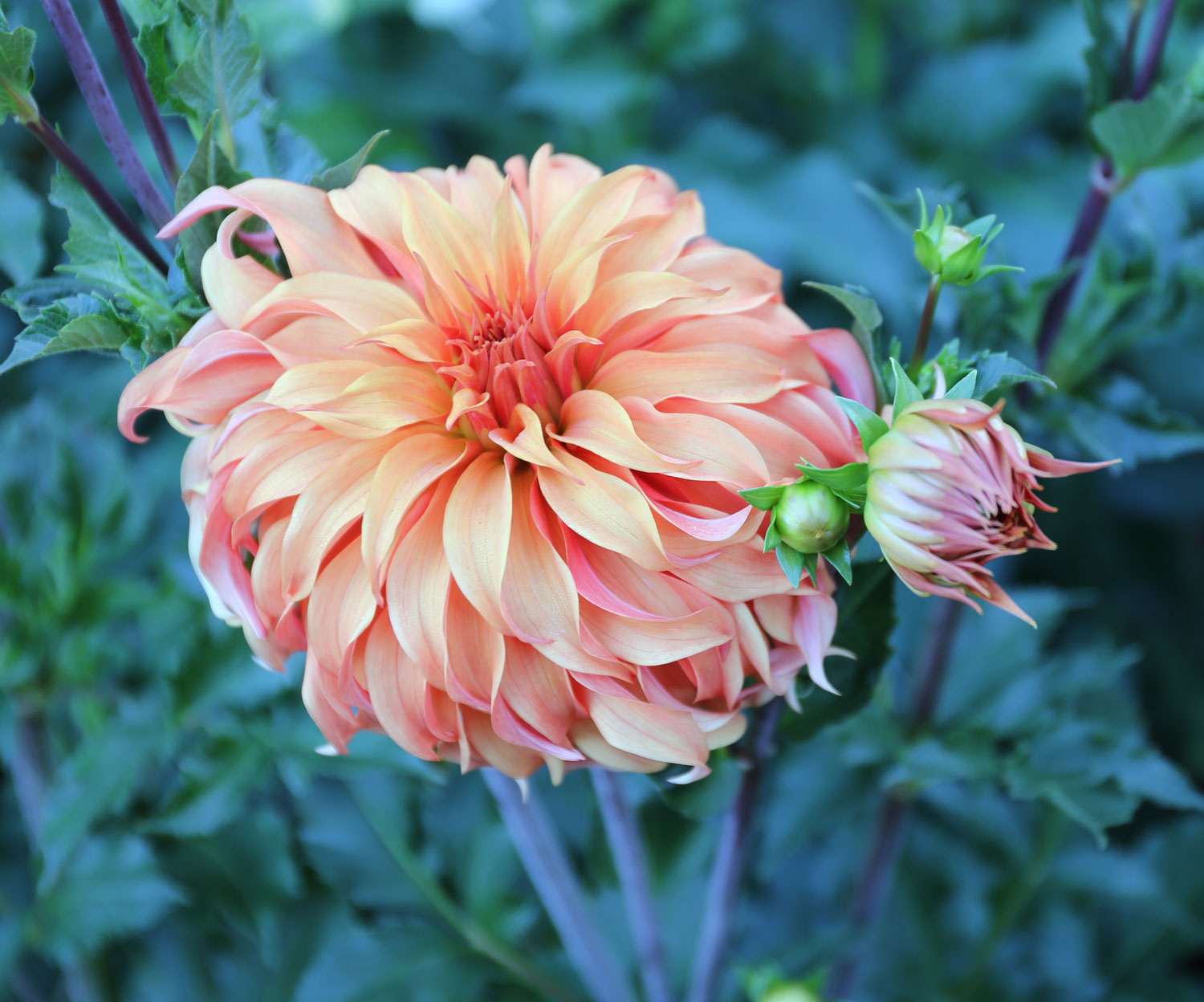 This dahlia was a wonder. Similar to Labyrinth, but more golden, with more orderly petals. I couldn’t find a label.

A peachy, semi-cactus dahlia showing off its vigor. SO many flowers! 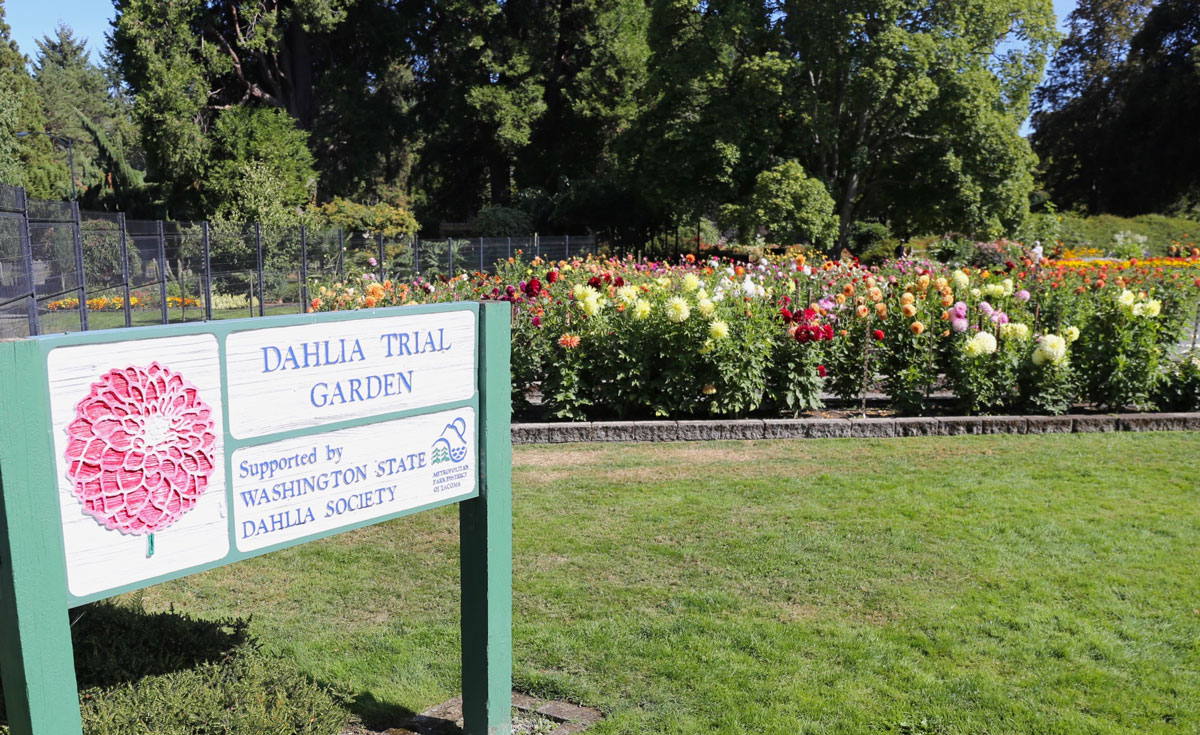 This dahlia display garden is located in Tacoma, about an hour from Seattle. Point Defiance is a 760-acre park that contains a zoo and aquarium, trails, beaches and several other display gardens. The Dahlia Trial Garden is expertly maintained by the Washington State Dahlia Society, and claims to be one of the largest official dahlia trial gardens in the U.S. and Canada. 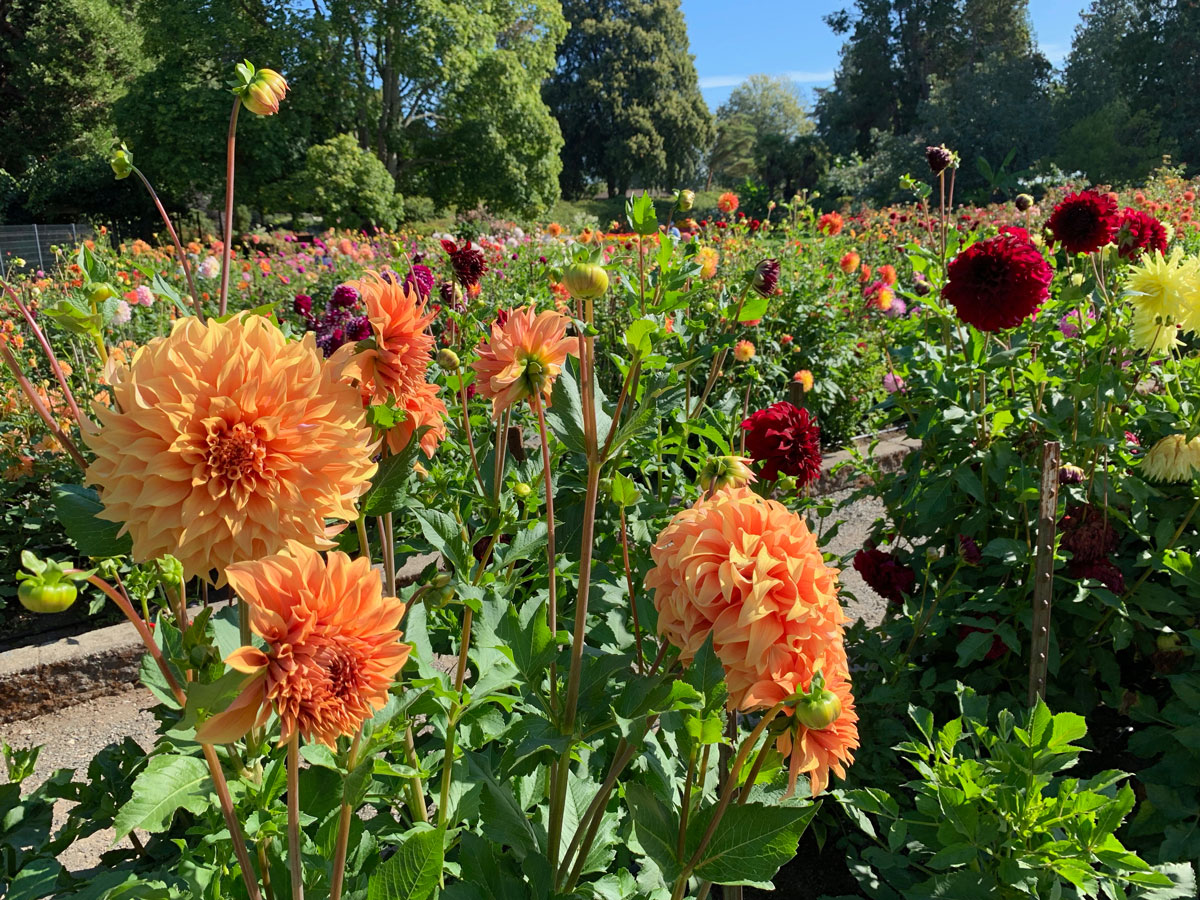 This is an outstanding dahlia display garden. It is enormous, well-situated, and beautifully maintained. There was not a fading flower in sight. I didn’t count the number of plants or the dimensions of the beds, but it seemed about 3 times the size of the one at Volunteer Park. Unfortunately, many of the plants were numbered, but not named. Be sure to allow extra time to visit the Rose Garden. It about twice the size of the dahlia garden and maintained to the same exacting standards. Every plant was in prime health and covered with blooms. 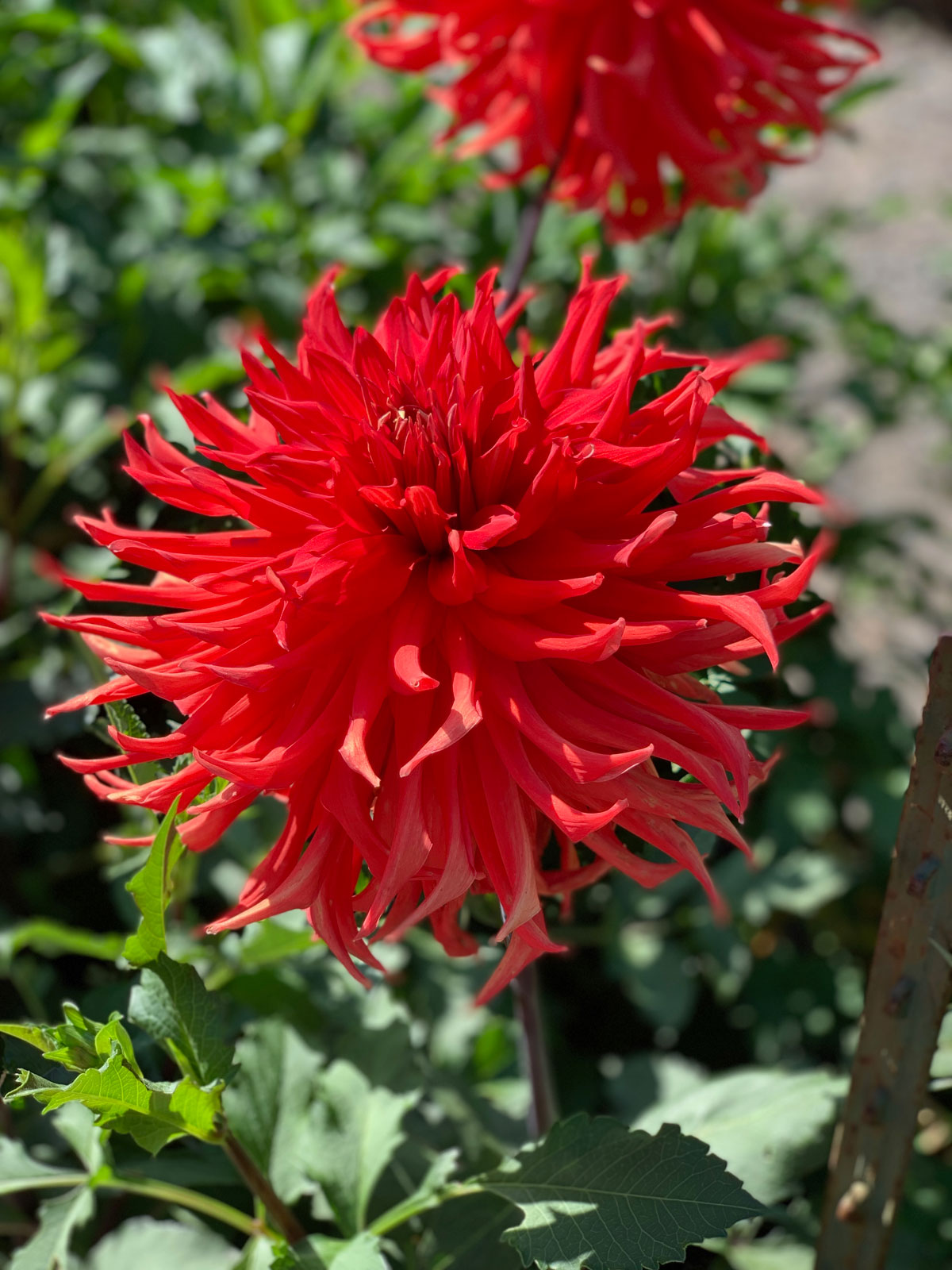 This cactus dahlia was at least 8″ across. Some of the dinnerplate varieties were 9 or even 10″. 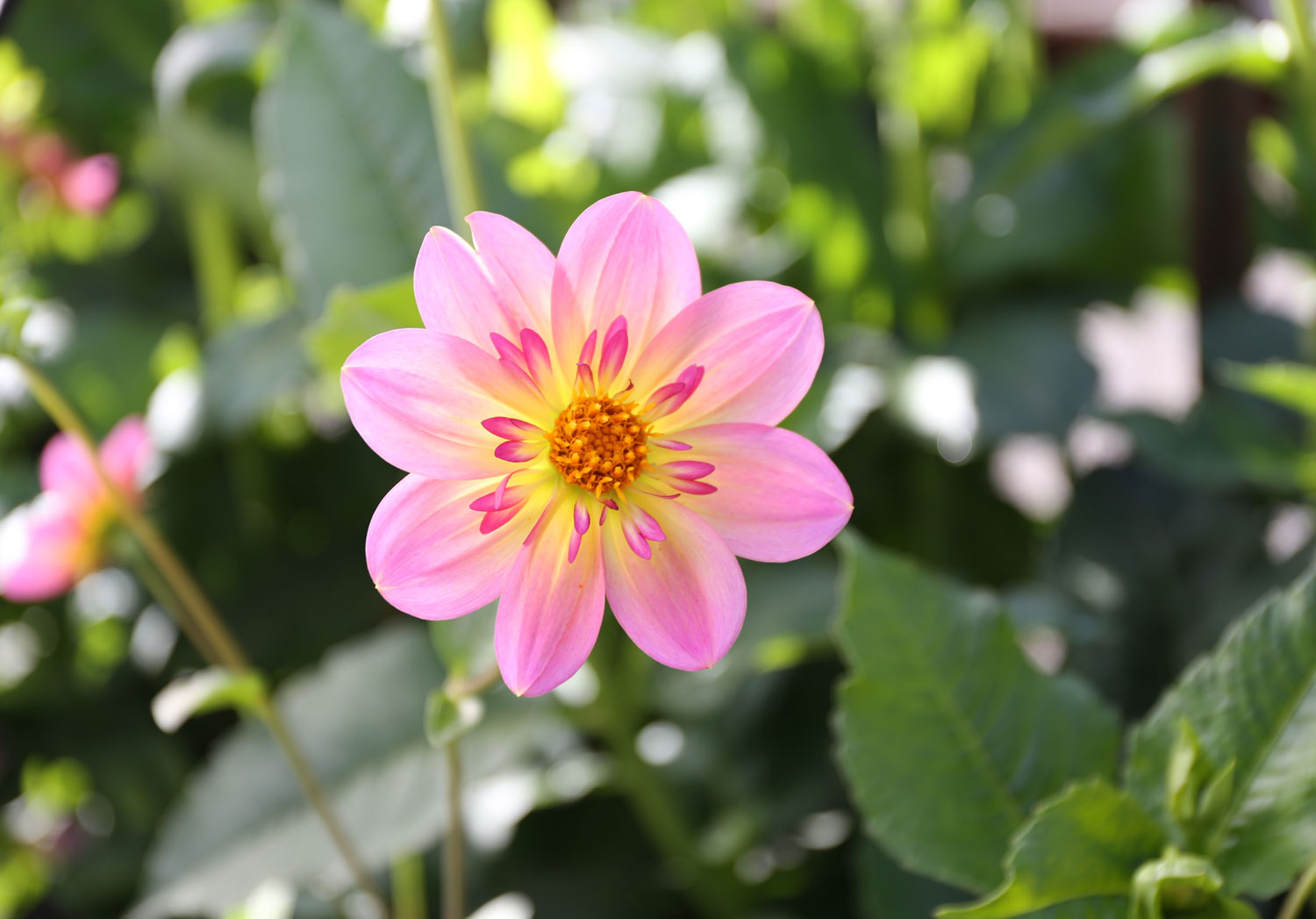 Both gardens featured many single and collarette varieties.

It was such a pleasure to see well-grown plants, flowering their hearts out. To learn more about growing dahlias, you may be interested in reading: All About Dahlias, 8 Tips for Growing Better Dahlias, Dahlia Flower Types and Sizes and Types of Dahlias: 8 Great Looks. Our complete line of dahlias is available for pre-ordering starting in January.