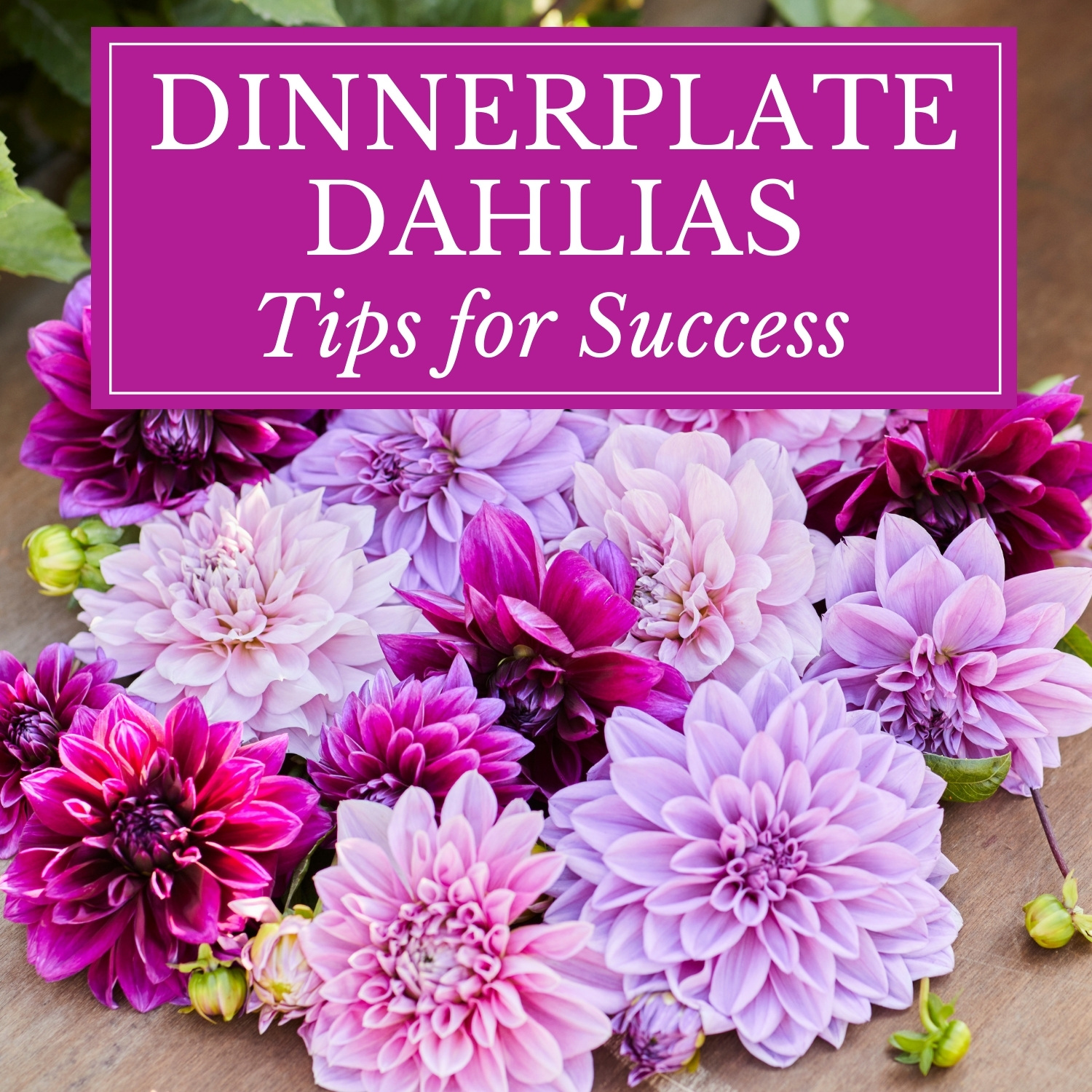 Dahlias are amazing plants. It takes less than three months for them to grow from potato-like tubers to chest height plants with dozens of flowers. The dahlia’s genetic diversity is equally impressive. You can spend a lifetime growing dahlias and still be discovering — and falling in love with — new varieties.

Each type of dahlia (ball, pompon, decorative, single, cactus, anemone) has its own special charm. You can see their relative heights and flower sizes in this infographic: Planning Guide for Dahlias. But for sheer flower power, dinnerplate dahlias always come out on top. 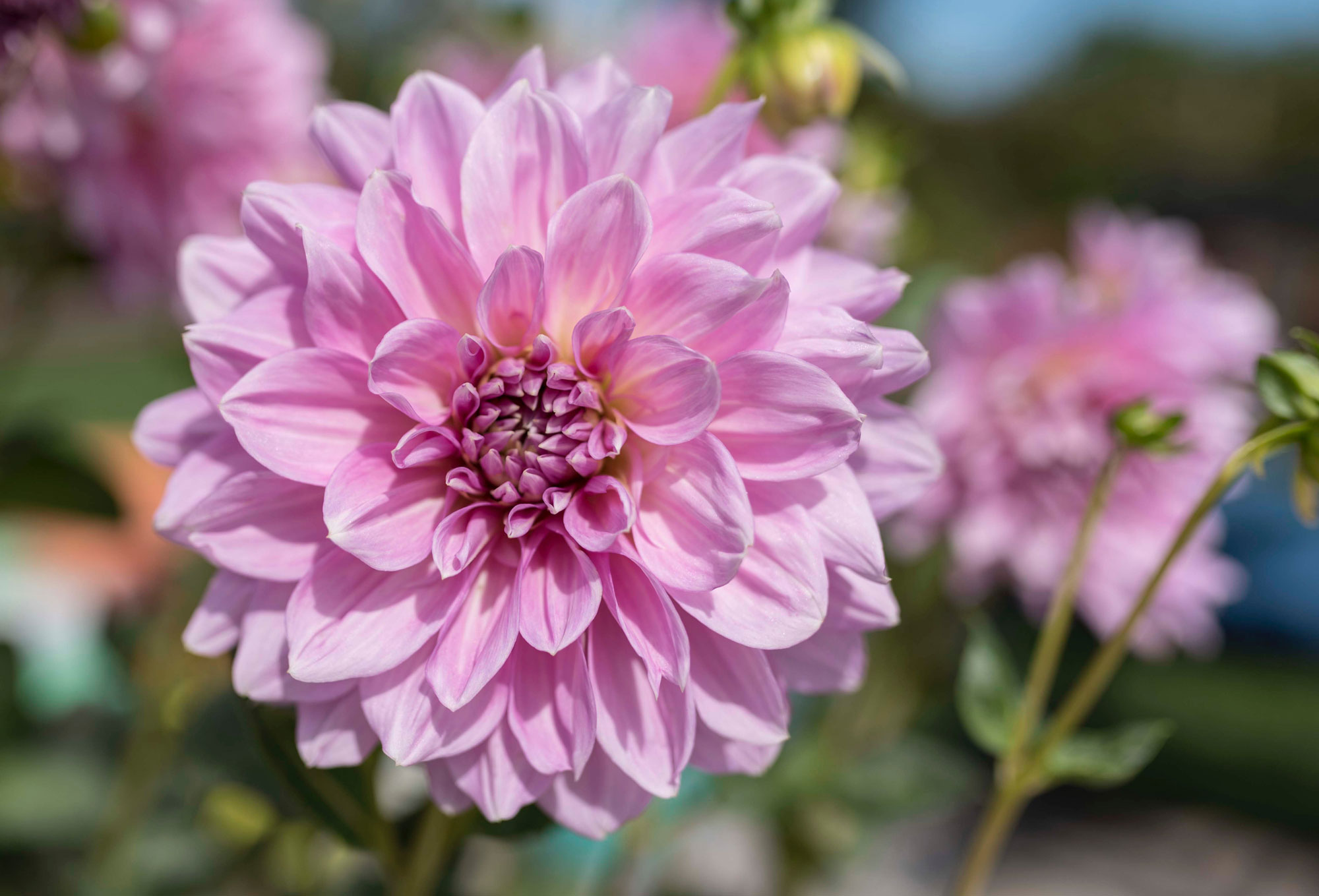 The flowers of dinnerplate dahlia Lavender Perfection are 8-10″ across.

What Are Dinnerplate Dahlias?

“Dinnerplate” is not an official dahlia society classification (like cactus, ball and pompon). Rather, it’s a common name applied to varieties with flowers that measure at least 8” across. The flower form varies. A dinnerplate dahlia may have broad, gently cupped petals, such as Café au Lait, Lavender Perfection and Thomas Edison. The petals could be twisted as in Taihejo, quilled as in Avignon, or shaggy as in Penhill Dark Monarch.

A generation ago, dinnerplate dahlias were still somewhat of a novelty. Popular for gardeners trying to win ribbons at the state fair, but uncommon in home gardens. Today, dinnerplate dahlias are coveted by gardeners from coast to coast. They are must-have flowers for weddings and essential for extravagant summer bouquets.

Growing dinnerplate dahlias isn’t much different from growing any other type of dahlia. But to make sure these divas reach their full potential, it’s worth giving them some extra attention in a couple of key areas. 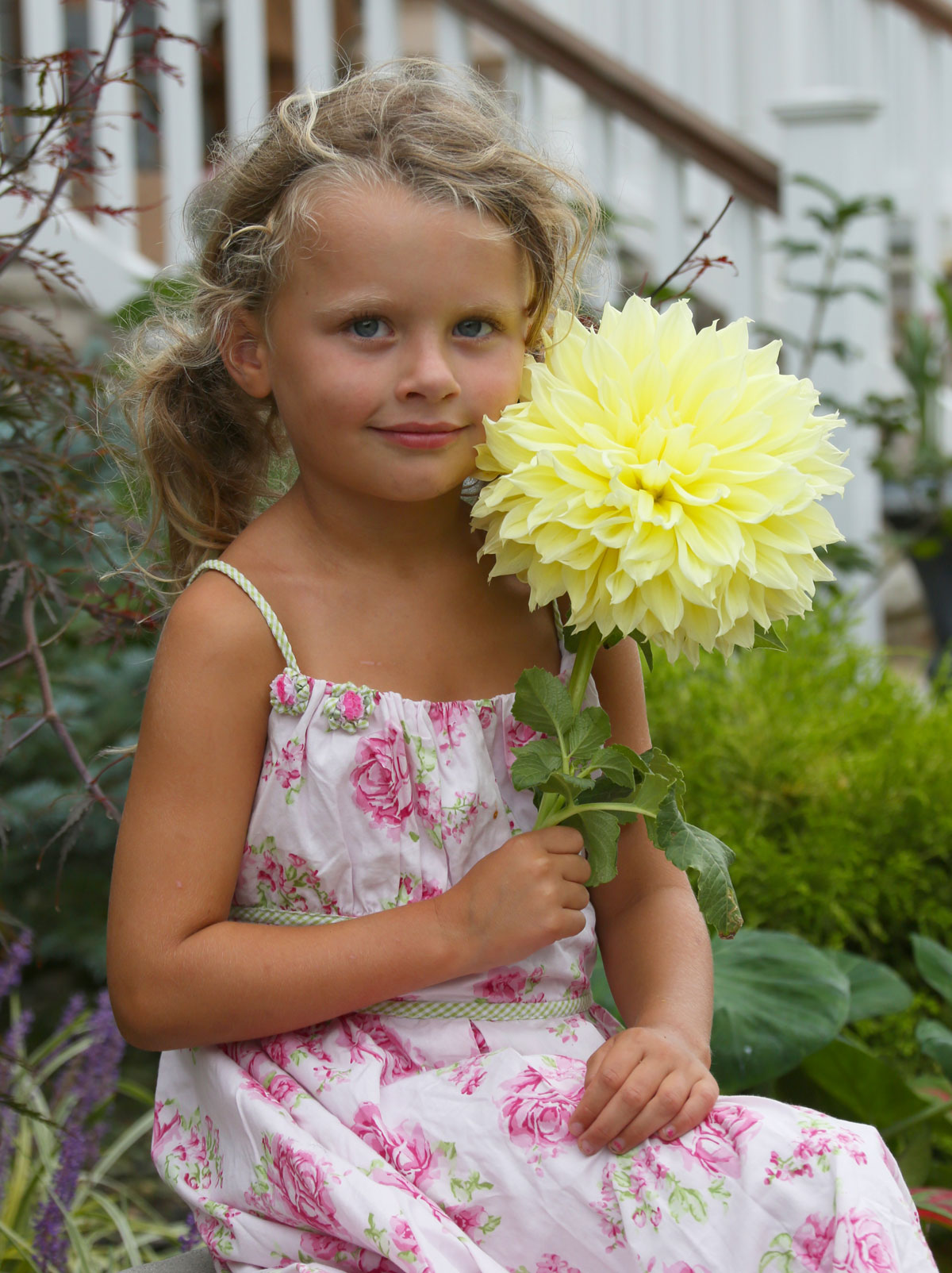 It takes a large plant to produce such impressive flowers. Most dinnerplate dahlias will be 4 to 6 feet tall by the time they start flowering. The sooner you can get your plants to maturity, the sooner they will start producing flowers.

While it’s good to get an early start, dahlias are sensitive to cold temperatures and should not be planted outdoors until after the last frost date. If you garden in the northern half of the country, consider starting the tubers in pots indoors, 4-6 weeks before transplanting them into the garden. With a head start, you can get flowers by mid-July rather than early August.

Dinnerplate dahlias need — and deserve — some pampering. Give them a prime planting location where they will get all day sun and be protected from gusty winds. Well-drained, fertile soil is essential. Dahlias suffer in heavy, wet soil. It stunts their growth and makes them more susceptible to disease and insect problems. If the soil in your garden is less than ideal, consider growing your dinnerplate dahlias in raised beds. 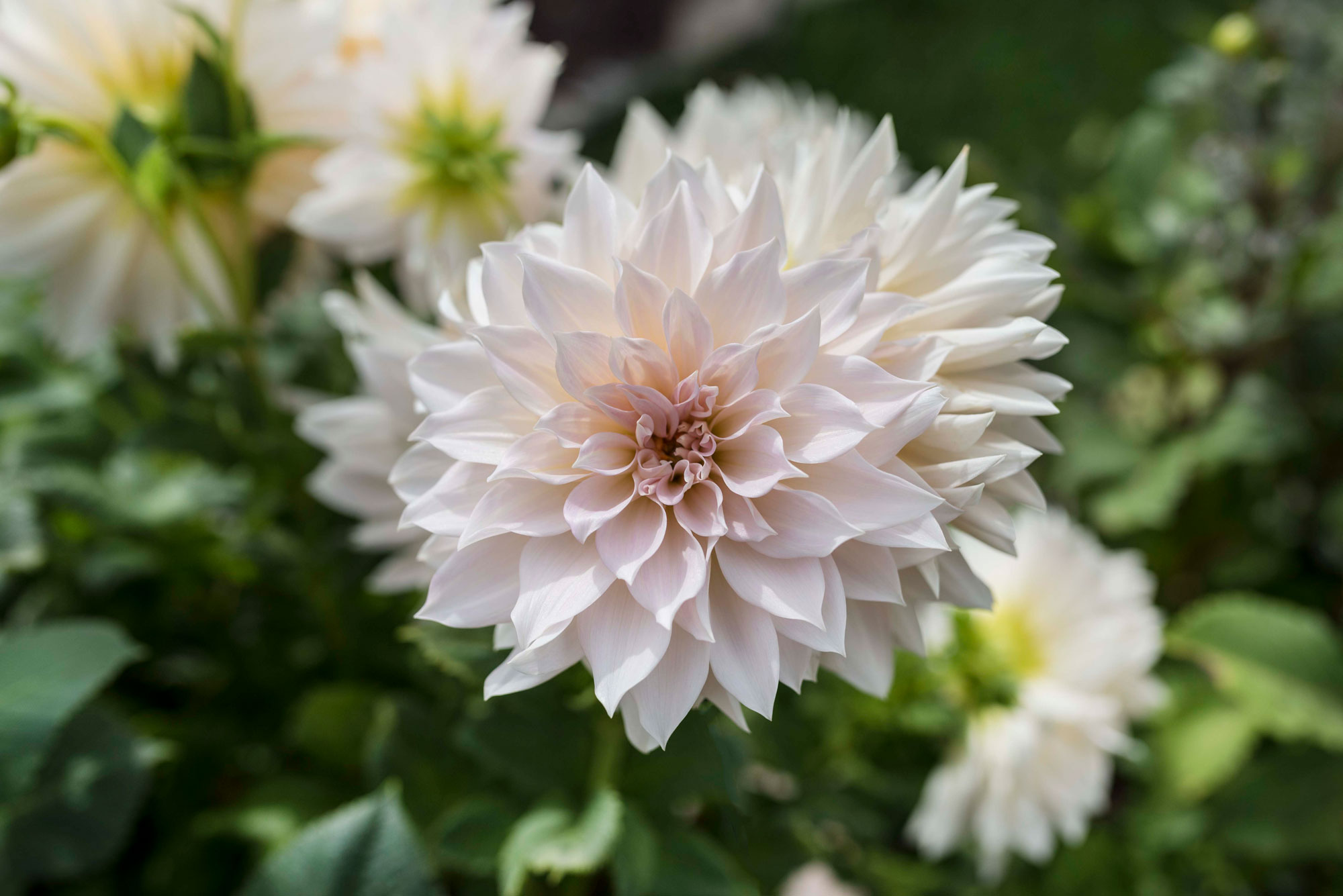 All dahlias respond well to being fertilized, and this is especially true for dinnerplate dahlias. At planting time, enrich the soil with compost and an all-purpose granular fertilizer (follow package directions). When the plants are a foot tall, start feeding them twice a month with a liquid all-purpose fertilizer, following the recommended dilution rates. Morbloom is a popular all-organic option. Many dahlia growers also supplement with monthly applications of liquid kelp or compost tea.

Dinnerplate dahlias develop a large root system that can be a foot across and just as deep. Watering slowly is the only way to ensure moisture reaches the entire root ball. Drip tape and soaker hose make it easy to maintain consistent moisture levels and avoid subjecting the plants to periods of drought. Watering at the root zone also keeps the foliage as dry as possible, which helps deter slugs, snails and earwigs, as well as foliar diseases. Dahlias perform best when they receive about an inch of water per week throughout the growing system. 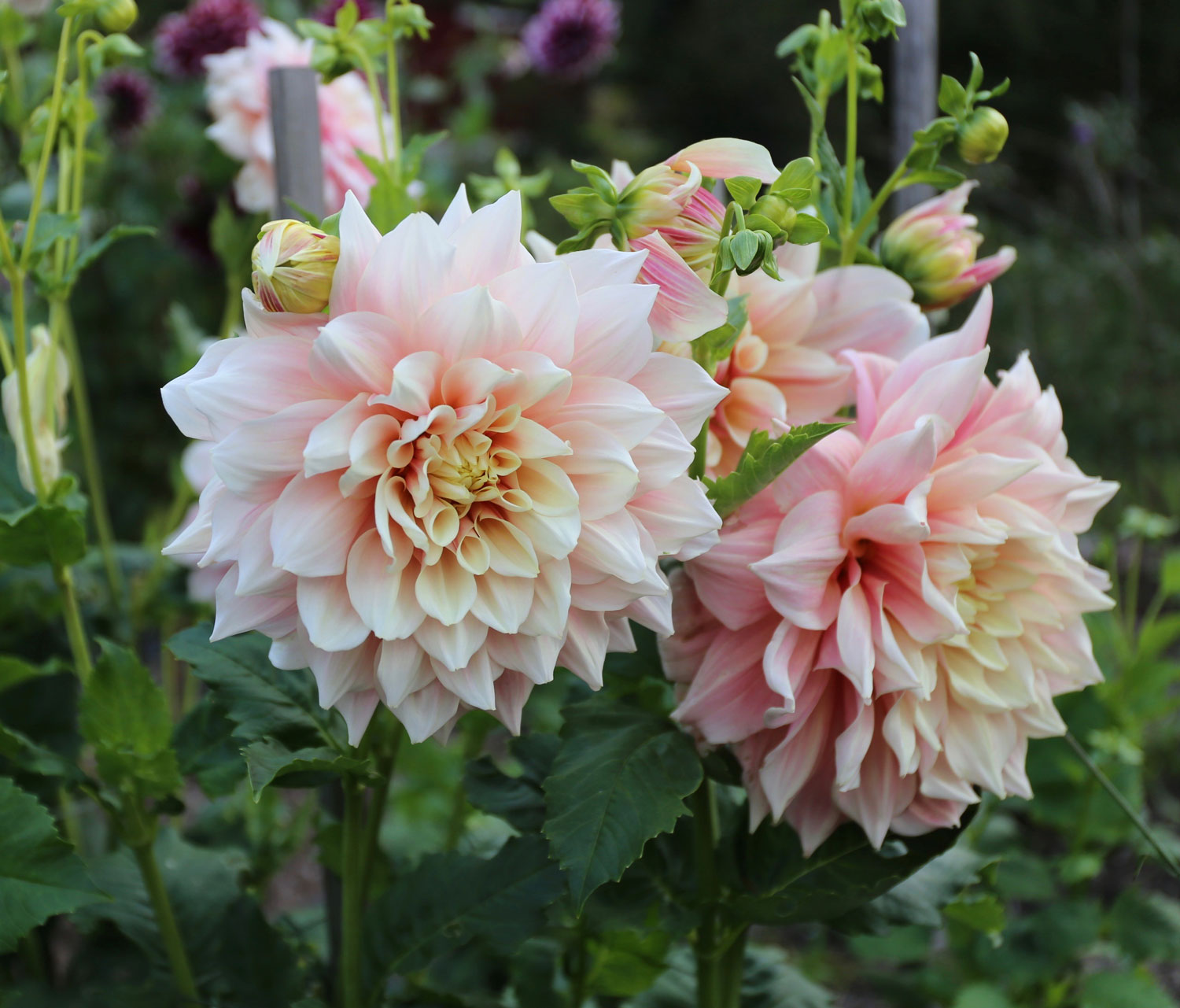 Dahlias have hollow stems that can easily bend, break, or split. The jumbo flower heads of dinnerplate dahlias are particularly at risk, especially if they get waterlogged. Sturdy support is essential. Stake the plants immediately after planting, and tie in the stalks as they grow. Once the plants begin to flower, keep a ball of twine at the ready. You can read about a number of staking options HERE. 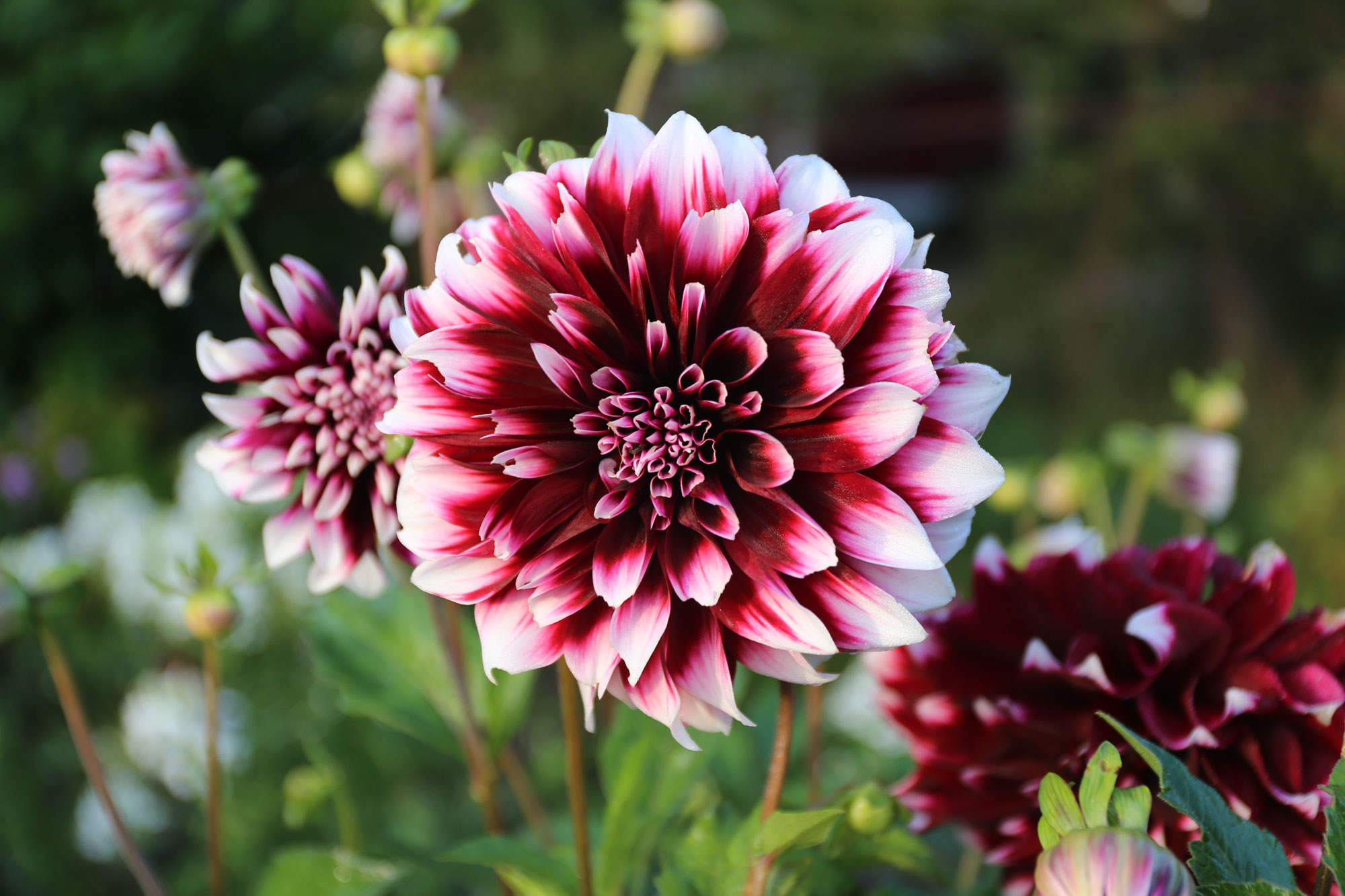 As with other dahlias, the more flowers you pick, the more blooms you’ll get. Plan to walk through your dahlia patch every 2-3 days, and bring the following things with you: sharp scissors, twine, a clean bucket with water for harvesting, and a bucket or tub for collecting spent blooms.

It’s best to pick flowers early or late in the day so the plants are not stressed by sun and heat. When gathering stems for an arrangement, look for blossoms that are fully open, but pick them before the back petals begin to soften. Cut long stems, even when it means sacrificing nearby buds. Flower farmers refer to this harvesting technique as “cutting hard.” It’s the best way to maintain good air circulation and encourage a new round of blooms with long stems. 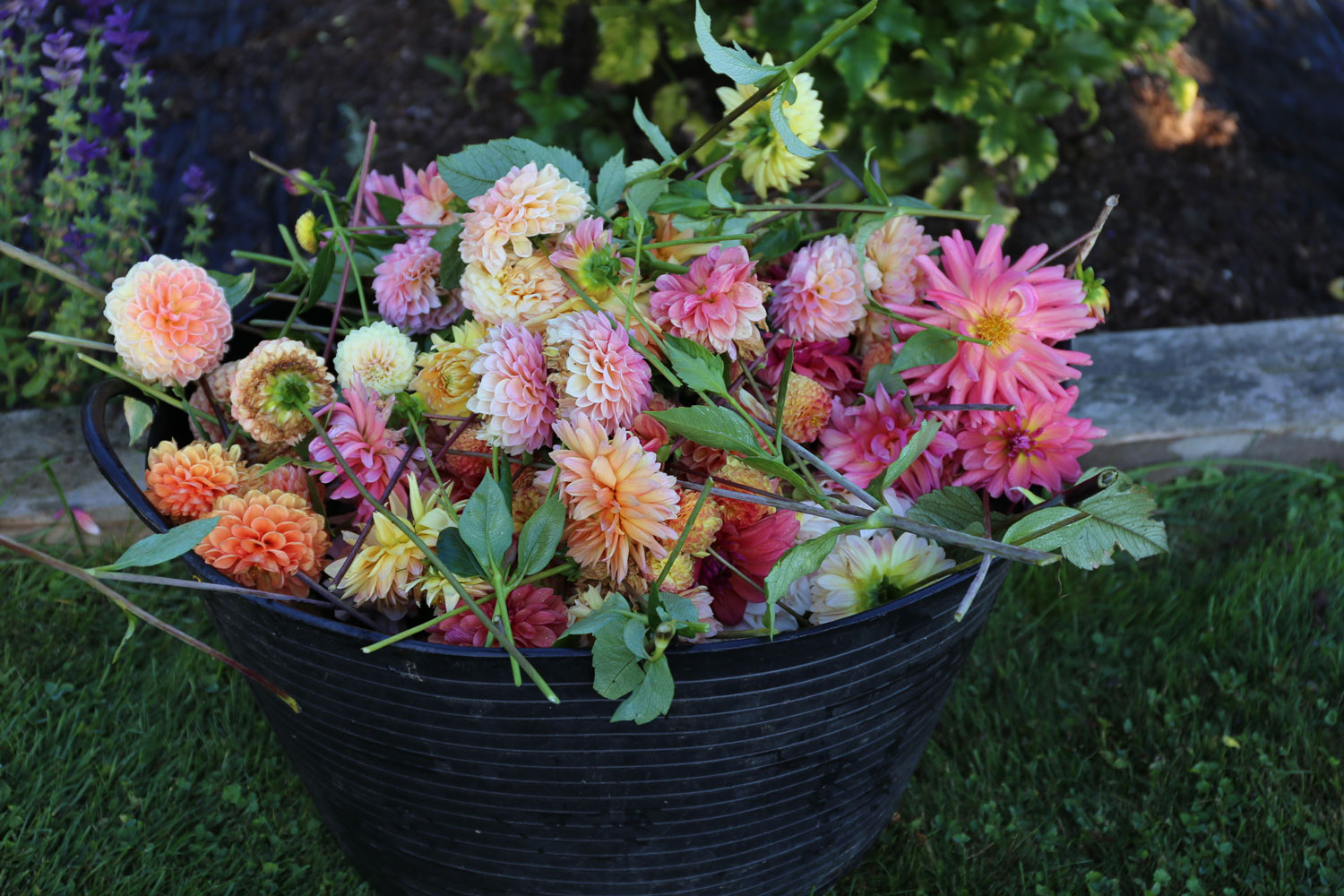 Deadhead often and remove the whole stem, not just the flower.

Rather than being a chore, deadheading is a great opportunity to hang out with your dahlias. Go slowly and take time to remove every blossom that has passed its prime. Use pruning shears to cut the full stem rather than just nipping off the flower heads.

Dinnerplate dahlias may require a little more TLC than some other plants, but you’ll be richly rewarded with months of flowers that are almost too big and too beautiful to be real.

To see our full selection of dinnerplate dahlias, click HERE. Learn more about growing dahlias here: All About Dahlias, 8 Tips for Growing Better Dahlias and How to Pinch and Stake Dahlias.