Get the Longest Vase Life from Hydrangeas 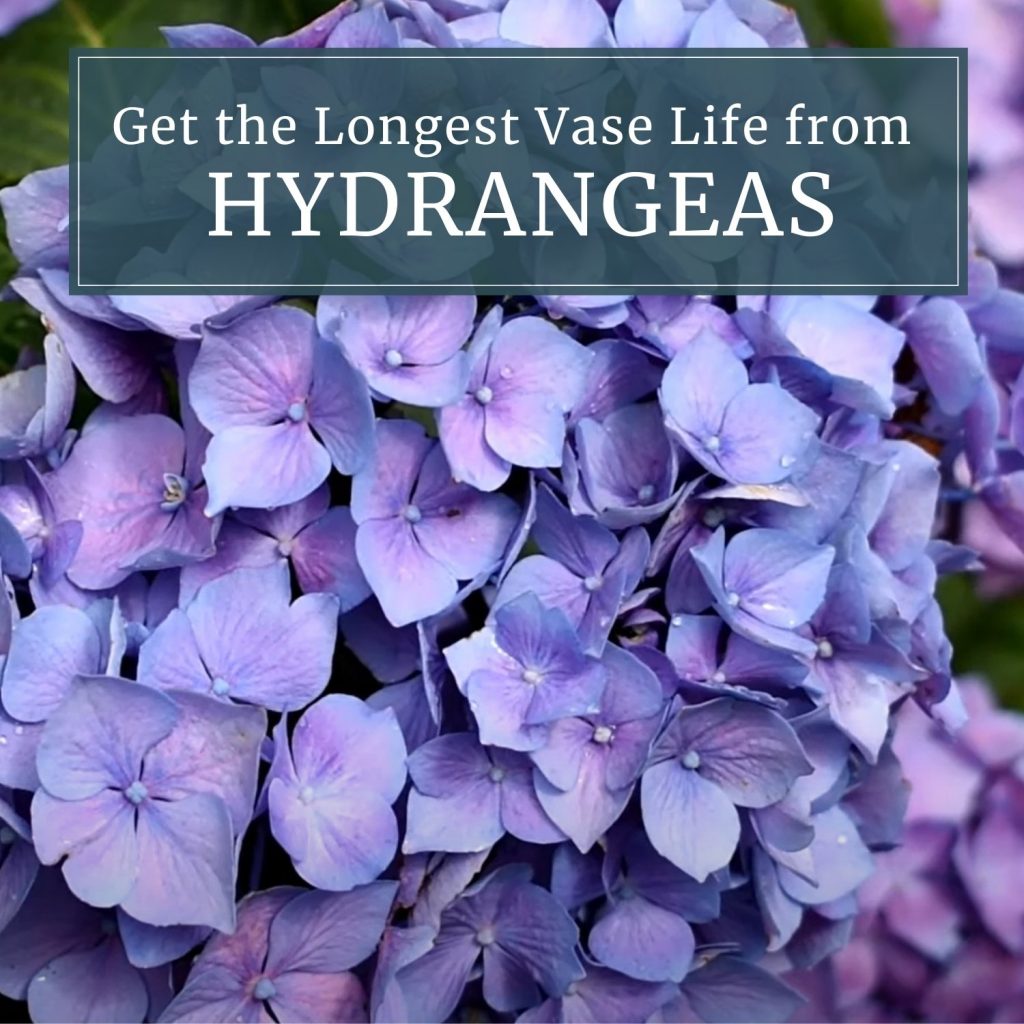 Do you want to get the longest vase life from hydrangeas? Of course, you do! Who wouldn’t want those big, blue blooms to last forever? But perhaps you’ve cut a bucket of their gorgeous flowers only to have them wilt a few days later. Or worse yet…a few hours later. Luckily, there are some tried and true steps you can take to get the longest vase life from cut hydrangeas.

Start with a well-hydrated plant

First, start with a well hydrated plant. If it hasn’t rained recently, water your hydrangea the night before harvesting. Next, cut the blooms very early in the morning before the sun is shining on the shrub. 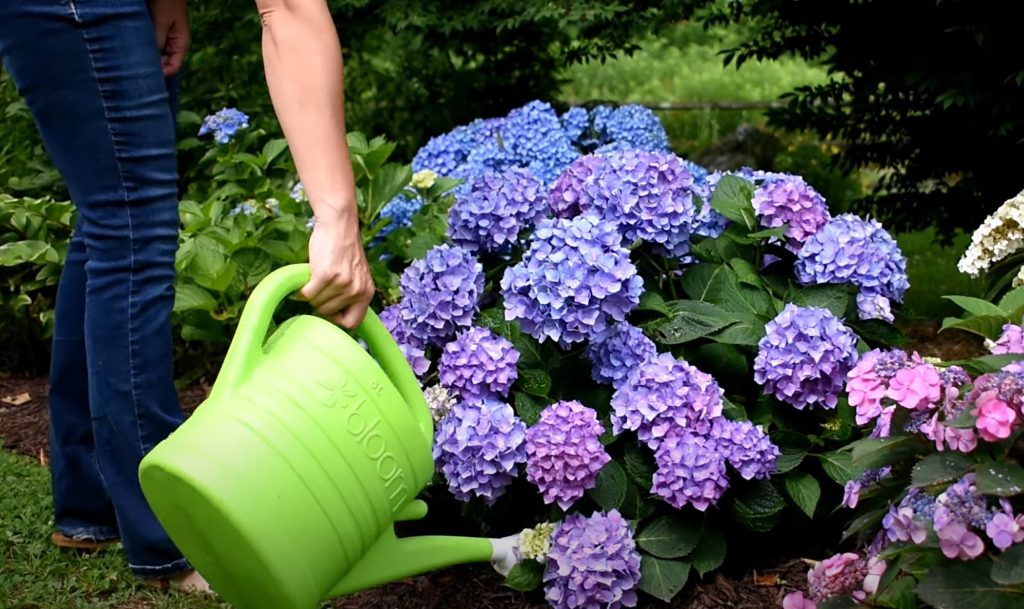 Best stage of harvest for hydrangeas

Harvest only mature hydrangea blooms that are fully open and colored. Immature blooms will always wilt in the vase and no trick will revive them. However, a mature bloom will easily last 7-14 days in the vase.

Make your cut just above a node and strip off all the leaves. Then make a vertical cut a few inches up the stem. This allows the hydrangea to drink more water. 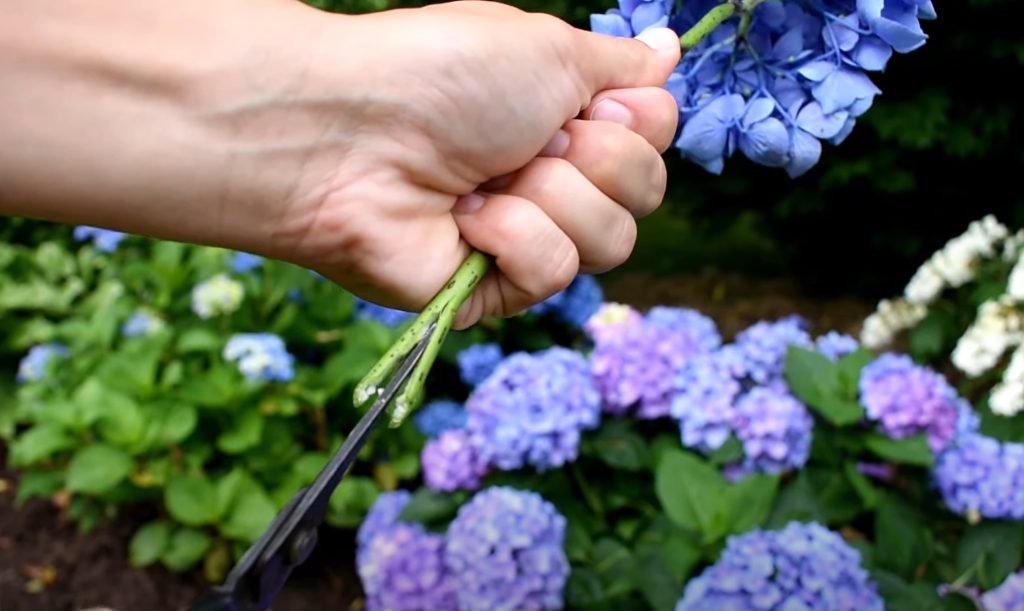 Place the stems immediately into room temperature water with flower food and bring them inside to condition for a few hours. Conditioning is the process where cut flowers remain in their original water to sit and rehydrate in a cool area before arranging.

After conditioning, recut the stems and dip them into alum powder. Alum is a pickling spice that increases the uptake of water. Alternatively, you can dip the stems into a fast hydration product such as Quick Dip. Then place the hydrangeas into their final vase filled with fresh water and flower food. Change the water in the vase every few days and give them a fresh cut at this time. Place the vase in a cool room away from direct sunlight to further extend their life.

From time to time a flower head will wilt in the vase. Luckily, there are two easy tricks to restore them. The first trick is the boiling water method. Start by pouring an inch of boiling water into a vase. Recut the wilted hydrangea stem and place it into the boiling water. Then let the water cool to room temperature. By the time the water has cooled, the hydrangea will be fully rehydrated and firm once again. When using this method, don’t pack the vase with too many wilted hydrangeas. The heads may be damaged if the steam is not able to escape.

Another option is to use the water bath method to revive wilted hydrangeas. For this, recut the stem and place the entire bloom and stem into a large basin of water. Take care to completely submerge the head and leave it in the water for 30 minutes. After a half hour has passed, take the bloom out of the water bath, place it in a vase of water, and allow the head to air dry. Within a few hours, the hydrangea will have perked back up and be ready for arranging! 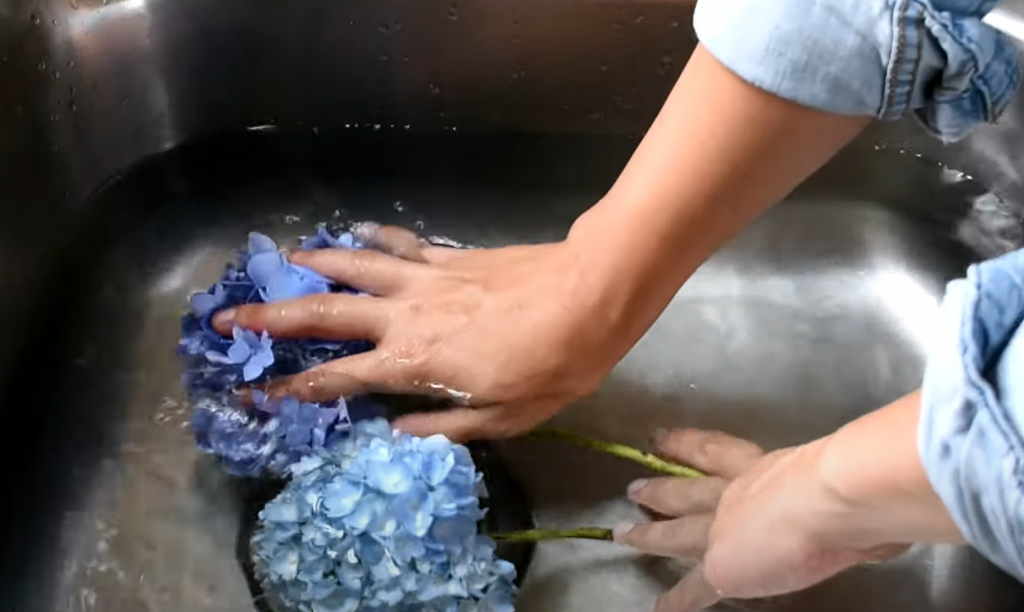 ← Off With Their Heads: How and Why to Deadhead Flowers
- Blog Home -
Less Water, More Flowers: 8 Tips for a Water-Saving Flower Garden →
[mc4wp_form id="3690"]