Landscaping Made Easy With Caladiums 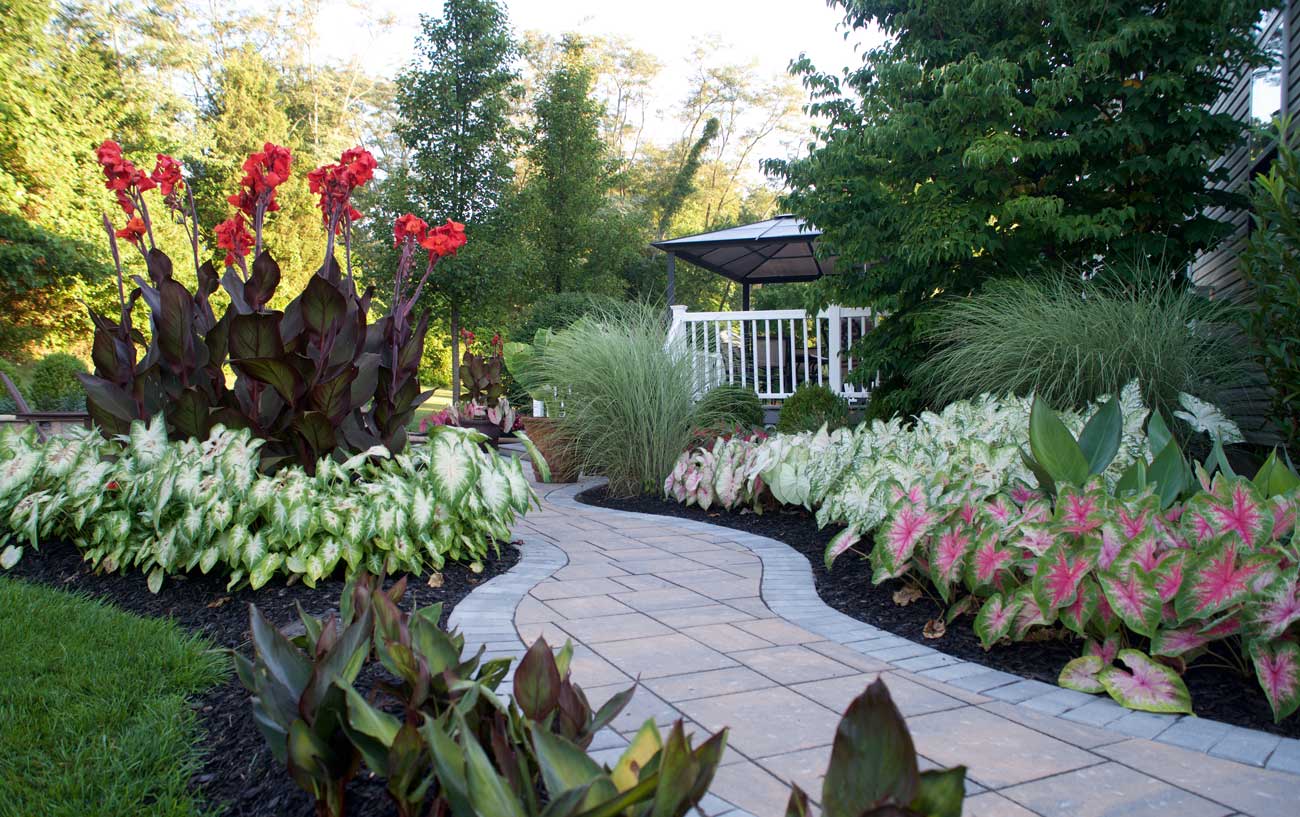 My idea of a great summer weekend is spending 10 or 15 hours in the garden. But I know not everyone feels the same, and that includes Longfield Gardens co-owner Pete Langeveld. Pete has one of the nicest yards in his neighborhood, with neatly landscaped beds and tons of color all summer long. He loves gardening, but with a busy job, several teenaged children and a passion for fishing, he doesn’t want to spend more than about an hour a week on his garden. 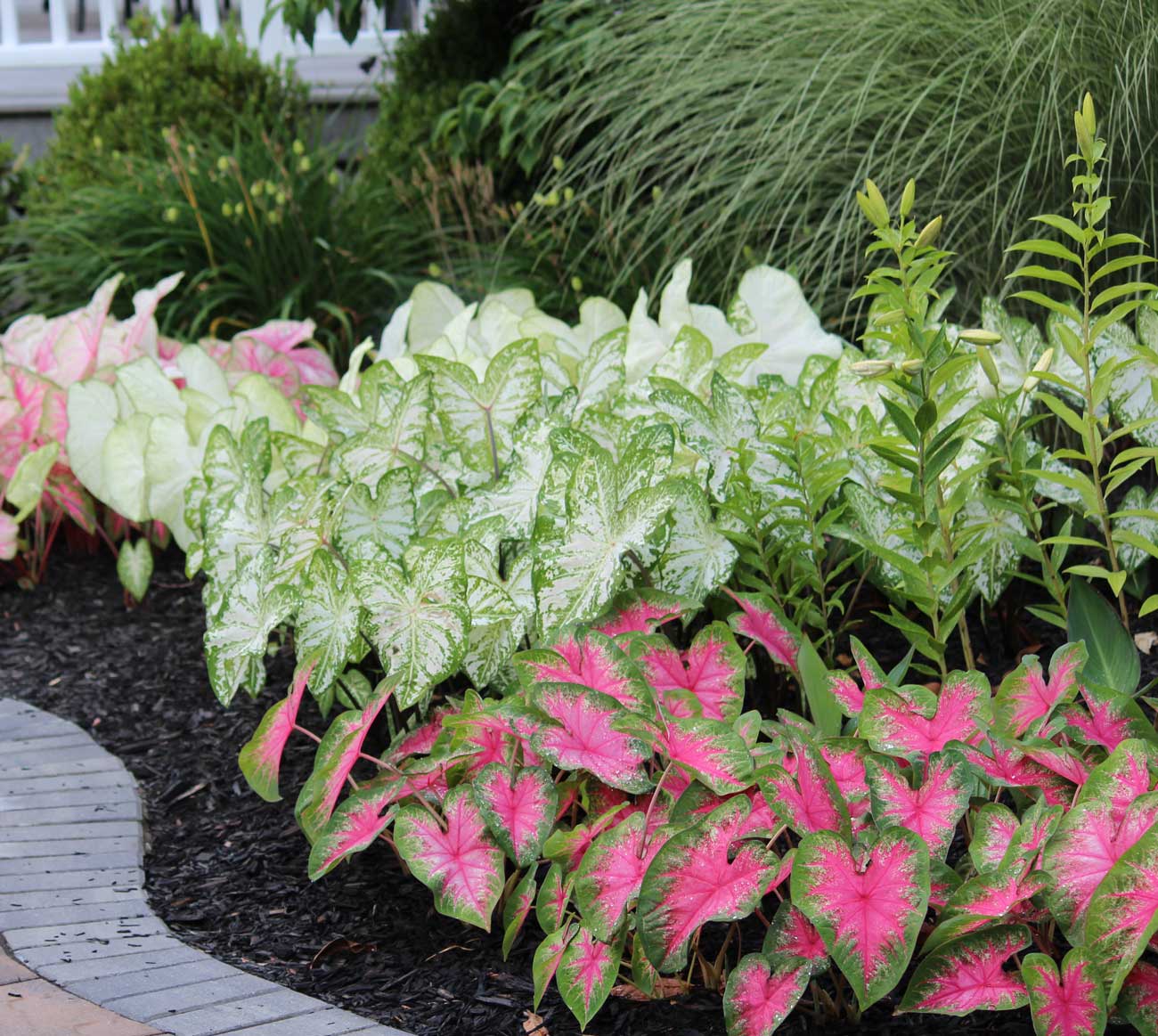 Pete’s solution? Caladiums! He says they are the lowest maintenance plant he’s ever grown. Modern caladiums are bigger, brighter and easier to grow than ever. They look great from July to September without a bit of attention, don’t need to be watered, have no disease or insect problems, and are rarely bothered by rabbits or groundhogs.

Last spring Pete planted more than 2000 caladiums in his yard. If he didn’t own a company that sells them, he probably wouldn’t plant so many. But since he does, he has come to know a lot about growing caladiums and has some tips worth passing along. 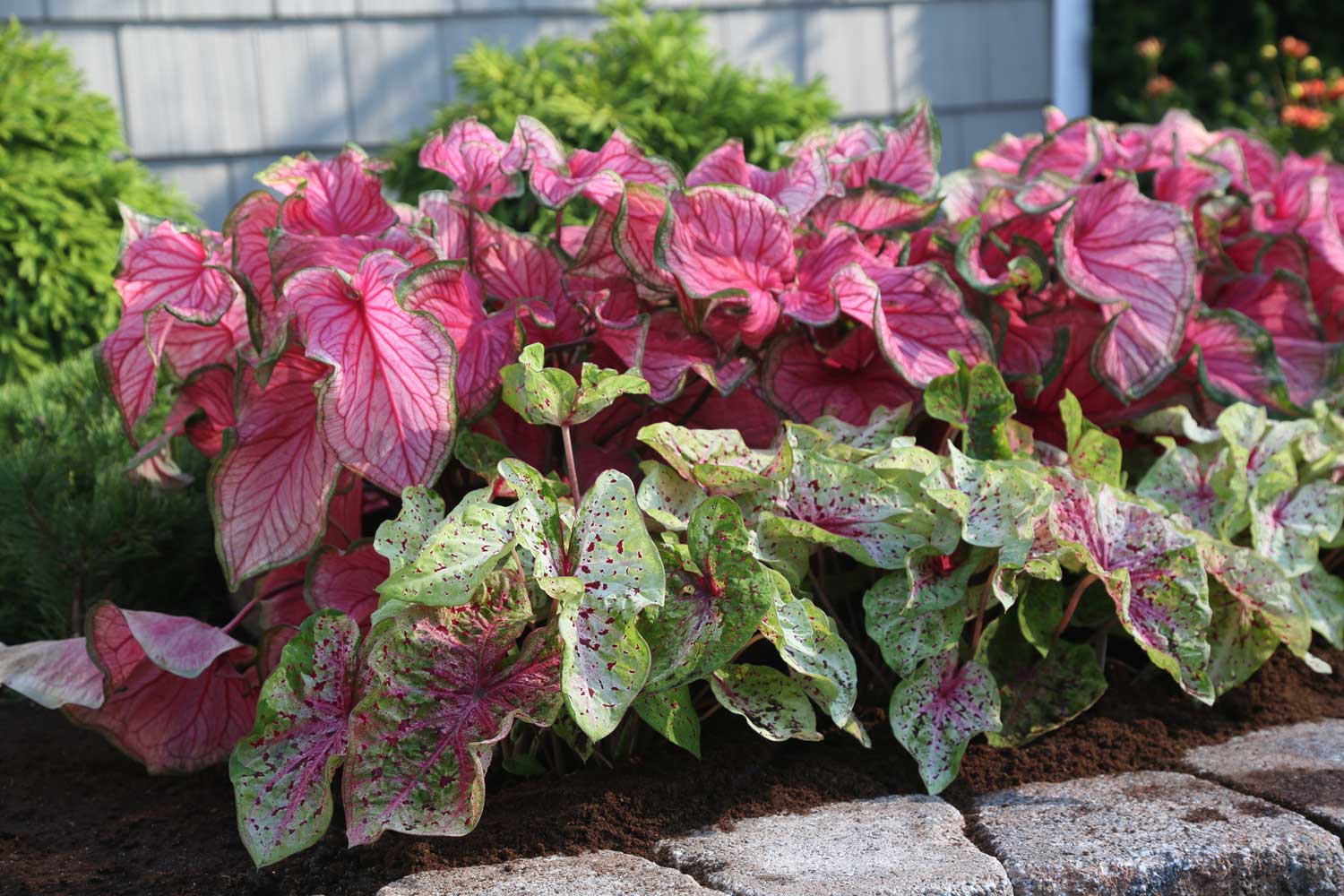 Pete lives in central New Jersey, which is growing zone 7. Though spring can arrive in early April, he waits another 6 to 8 weeks before planting the caladiums. Caladiums hate cold weather and refuse to grow until the soil temperature reaches 70°F. Where Pete lives that’s usually around Memorial Day at the earliest and often it’s the first week of June.

If you live in a colder growing zone, you can get a jump on the season by pre-sprouting your caladiums. About 4 weeks before you expect to plant them outdoors, put the tuberous roots into a tub of moist growing mix. Cover the tub loosely with some clear plastic wrap and put it in a warm place away from direct sunlight. About 75°F is ideal. Once the tubers have sprouted and the soil outdoors is warm, you can go ahead and plant. 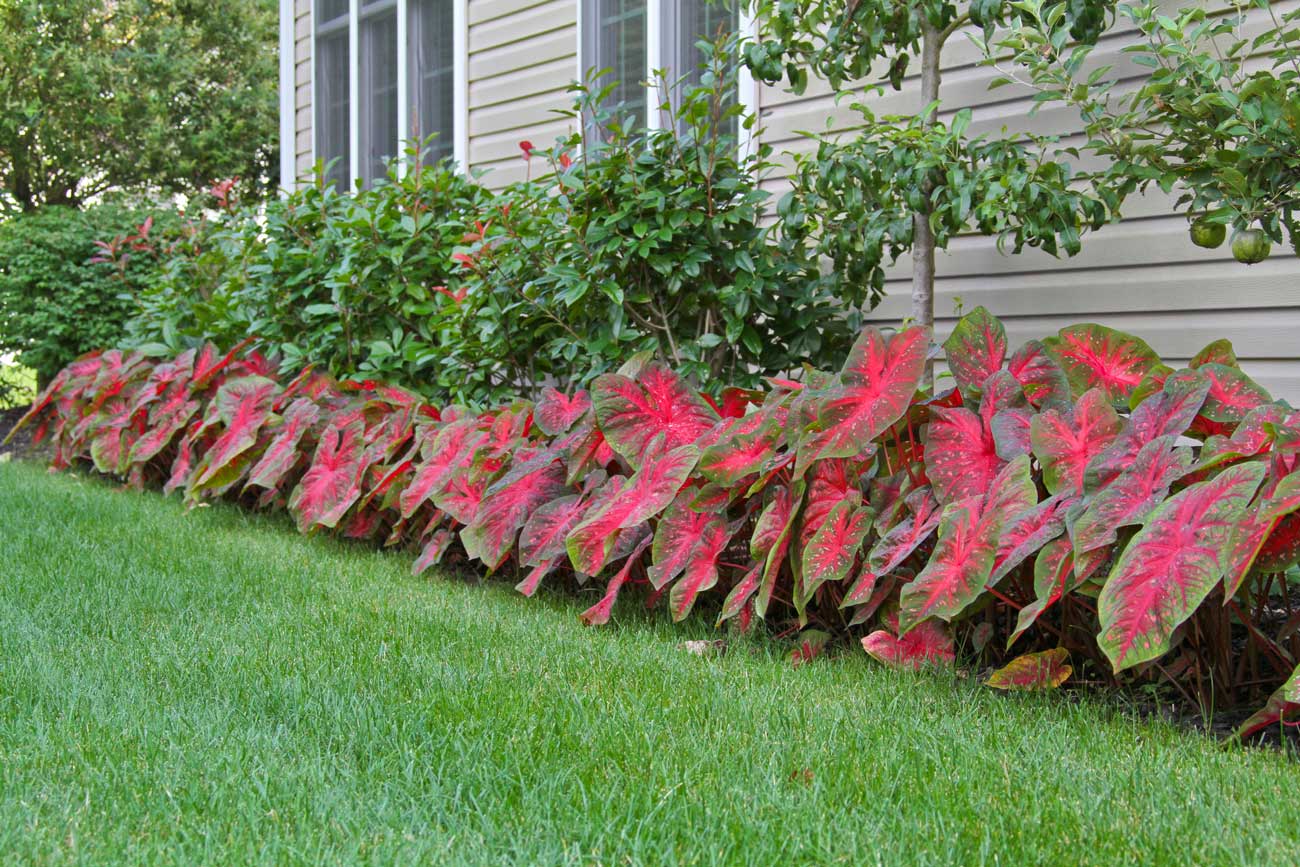 Caladiums require well drained soil, so don’t plant them in an area that’s soggy. Light is the other important consideration. Caladiums are shade-loving plants that grow well in full to part shade. Some varieties will also tolerate full sun. Pete’s yard has a mix of sun and shade, so in the sunny areas he plants sun-tolerant caladiums such as Red Flash and Rosebud. In shady areas he goes with varieties with leaves that are too sensitive for direct sun, such as Fannie Munson, Candidum and Dragon Heart.

And don’t forget containers. Caladiums grow extremely well in containers – including hanging baskets. Plant them alone or mix them in with other heat-loving annuals such as coleus, impatiens, licorice plant, euphorbia, tradescantia, lysimachia, begonias and elephant ears. Sun tolerant varieties can be combined with cannas, calibrachoa and other popular container plants. 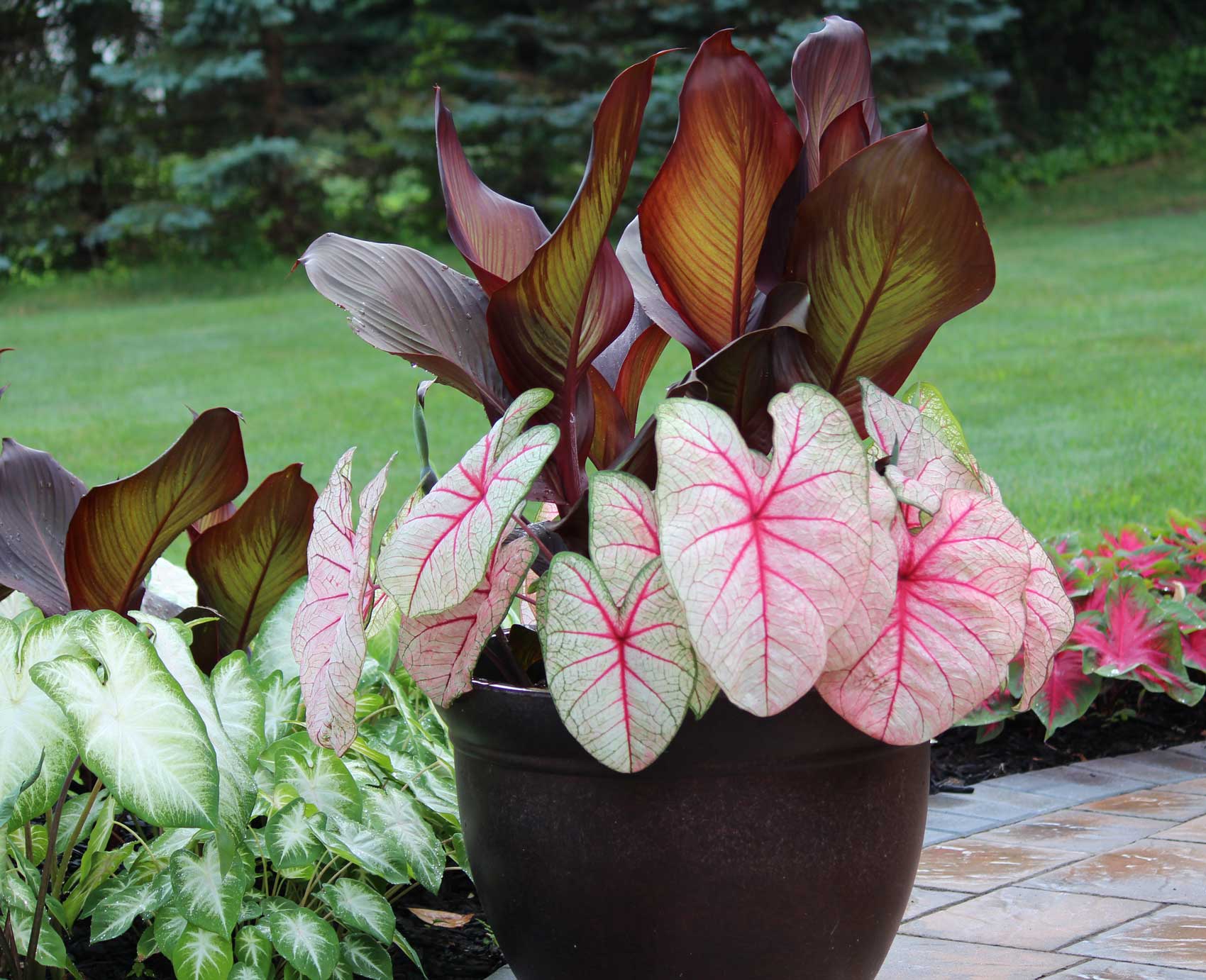 Pete plants his caladiums in big swathes, keeping the varieties relatively separate. He feels this planting technique helps to unify each area of the garden, while also creating bigger, more eye-catching blocks of color.

For shady areas, Pete’s favorite variety is Fannie Munson. It’s his family’s favorite, too. The leaves are very large and their neon pink color is almost impossibly bright. For areas that get part or full sun, Pete has three favorites: Rosebud, White Queen and Florida Sweetheart. 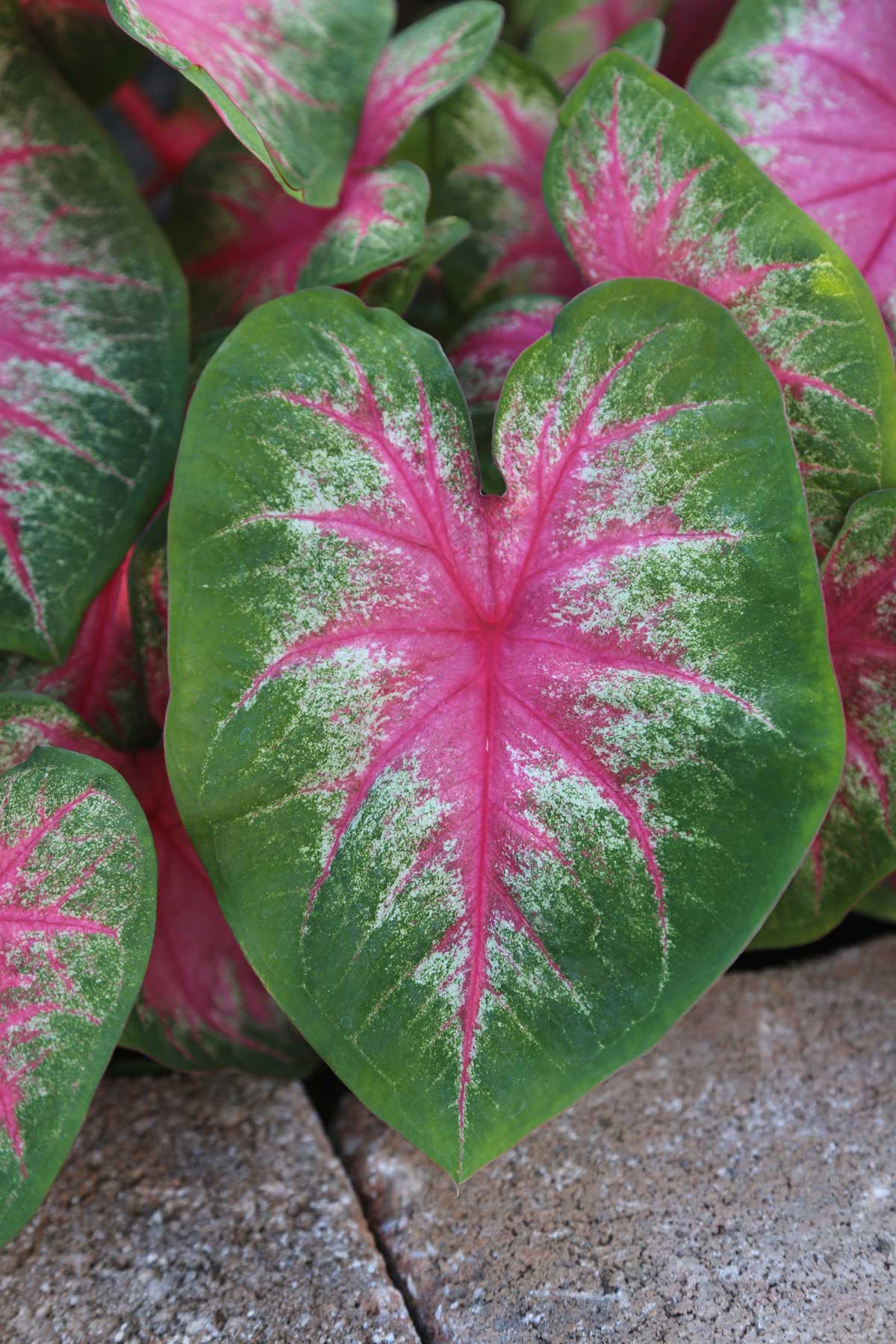 Rosebud is early and has very well defined leaf patterns – hot pink against shamrock green. White Queen’s foliage changes color as it matures, going from rosy pink to almost white. Newly emerging leaves among older leaves give the planting a two-tone effect. Florida Sweetheart is more compact that most caladiums, growing just 8” tall. This makes it useful for planting under shrubs or in front of taller caladium varieties. 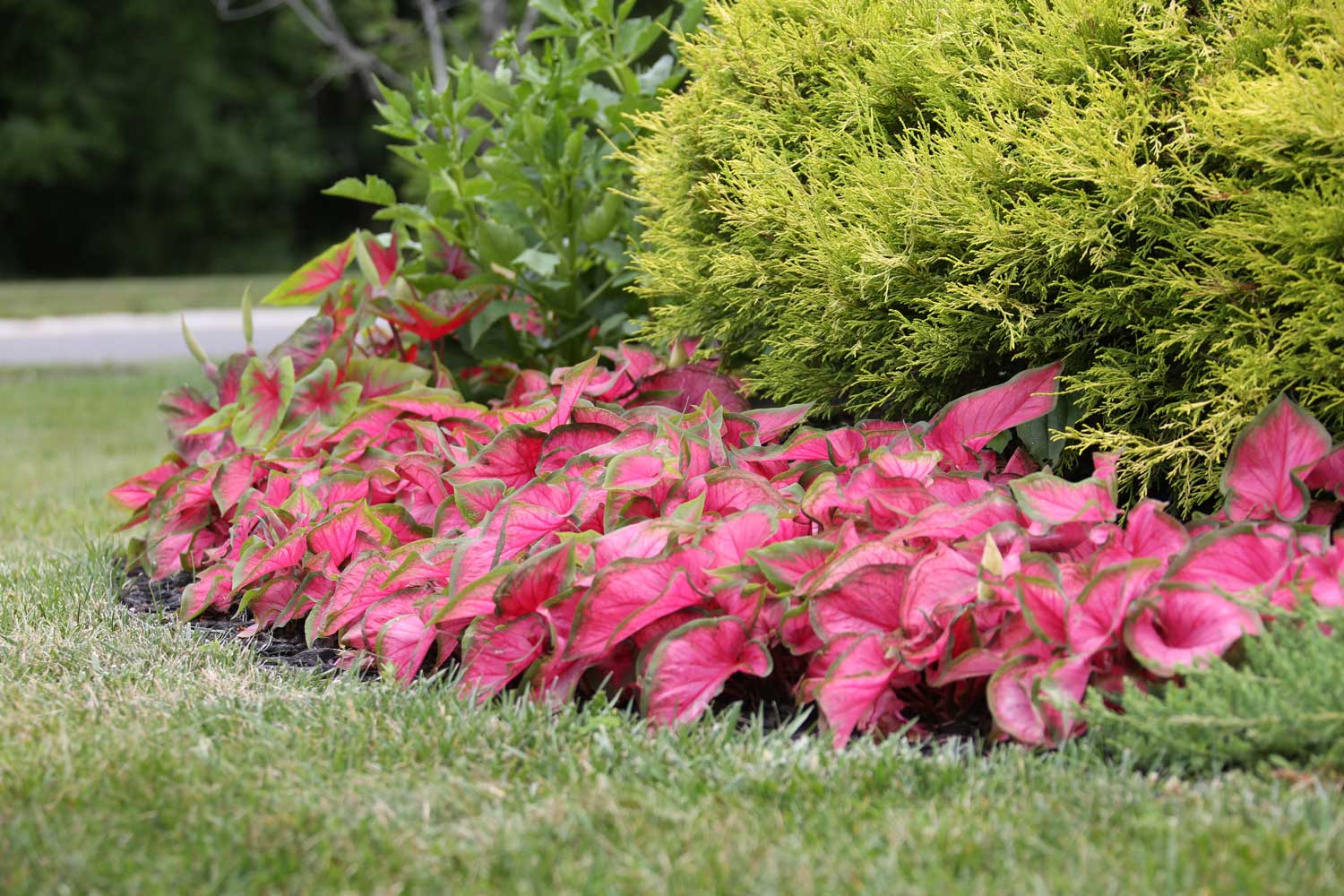 Start with good-size tubers (#1) and plant them 8” on center. Caladium tubers have “eyes” like on a potato. Plant your tubers with the eyes (or sprouts) facing up. Aim for planting them about an inch below the soil surface.

Pete plants caladiums with a garden trowel. He puts the trowel in the soil, pulls back and drops in a tuber. Planting has become a Memorial Day weekend tradition, and with everyone helping, it only takes a few hours. He says watering newly planted caladiums helps settle them into the soil, but it isn’t necessary unless the soil is dry. 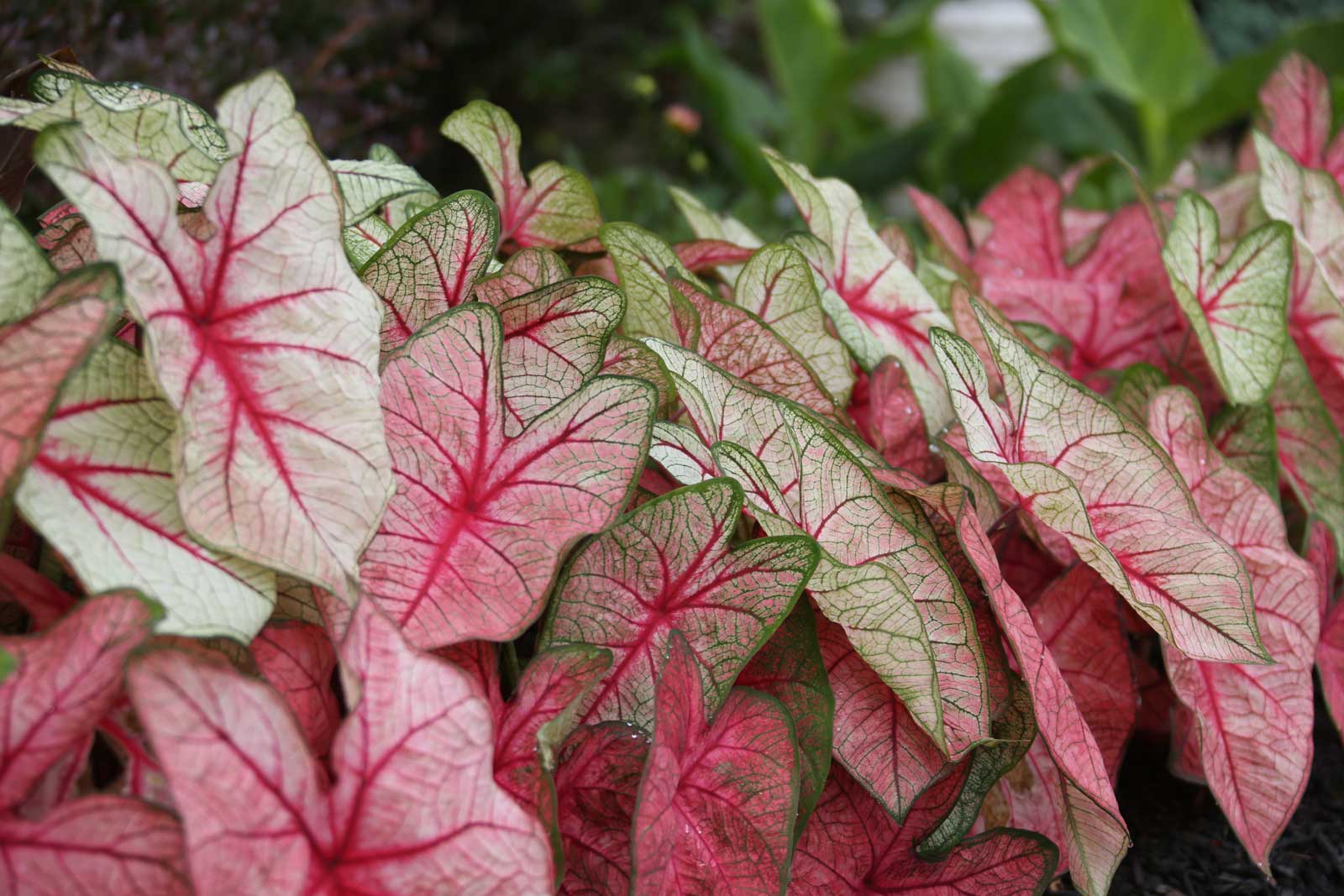 Hot and steamy weather suits caladiums. If the weather is unusually dry, you may need to water them occasionally. Plants that are grown in the sun will be thirstier than those in the shade.

Pete says the caladium’s only natural enemy is cold. In early fall, when evening temperatures start dropping below 60°F, the plants begin entering dormancy. This happens even in warm areas where caladiums are winter hardy. Their leaves will droop and eventually wither and brown. 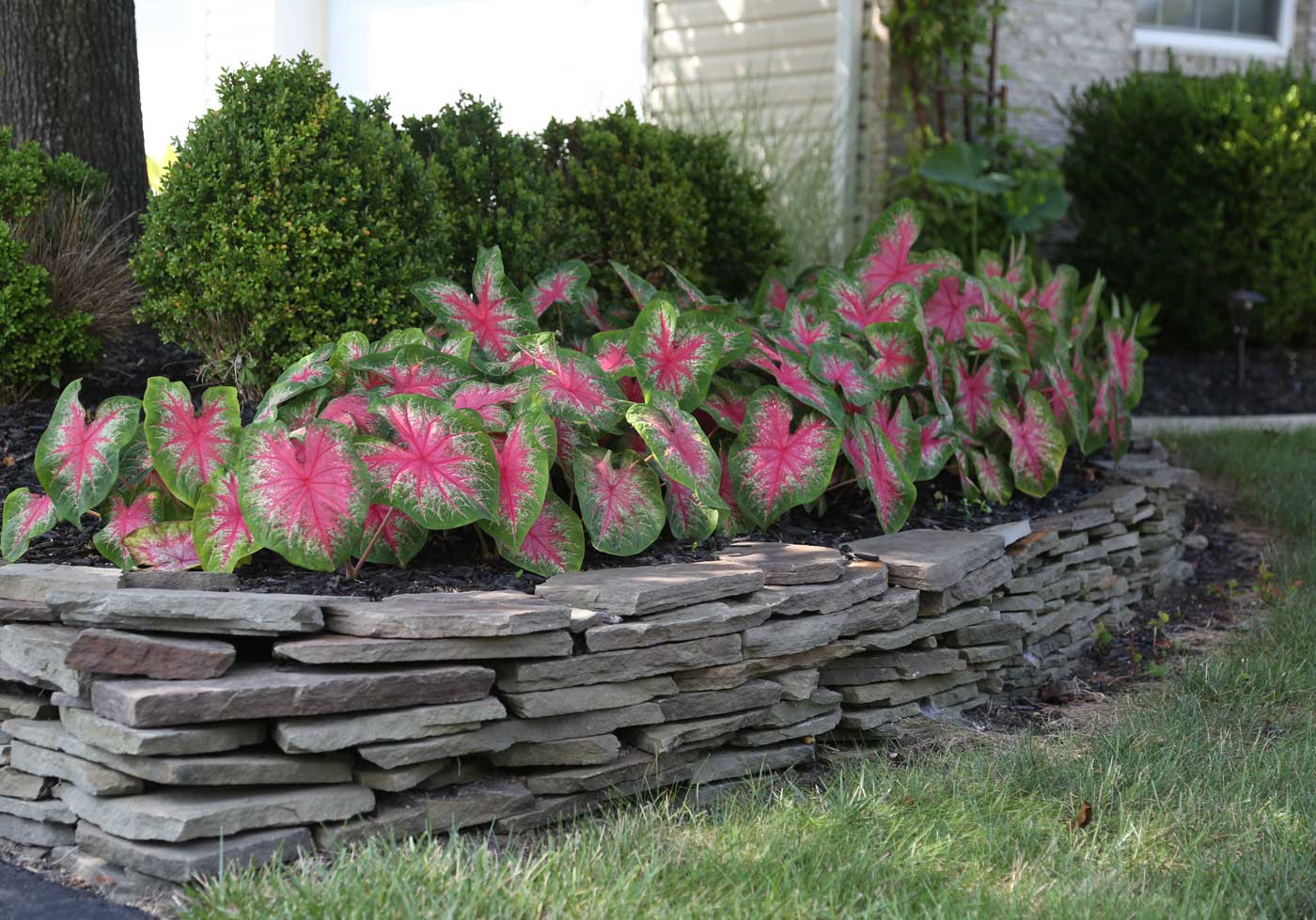 If you live in the northern half of the country (growing zones 4-7), you’ll need to dig up the bulbs before the first frost and store them indoors for the winter. In warmer zones where caladiums are winter hardy, the dormant bulbs can be left right in the garden. Covering them with 3 to 6 inches of mulch will add extra cold protection.

Ready to give caladiums a try in your garden? Click HERE to shop our selection. To learn more, read All About Caladiums or Landscaping With Caladiums, and watch our video How to Plant Caladiums.